Statistics Iceland has published data on students in compulsory education and upper secondary schools learning foreign languages during the school year 2011-2012. The data are published for the European Day of Languages, 26 September.

The data show that there have never been more pupils in compulsory schools learning Spanish, while the proportion of students of Spanish in upper secondary schools drops for the first time in the Statistics Iceland data collection.

The same development can be observed in other European countries, i.e. teaching foreign languages at an earlier age is becoming more common in compulsory education. The number of hours dedicated to foreign languages in Europe has not increased as much as the number of students. In Iceland the number of 40 minute teaching hours devoted to teaching English and Danish every week in all ten grades of compulsory education has increased from 32.9 in 2000-2001 to 34.9 in 2011-2012.

Almost one thousand students in grades 1-6 learn Danish
Most pupils start learning Danish in grade 7, at the age of 12. A total of 956 pupils younger than 12 years old learned Danish in 2011-2012. In many schools pupils who know Norwegian or Swedish can select those languages instead of Danish. Last school year a total of 108 pupils selected Swedish rather than Danish and 77 pupils learned Norwegian. 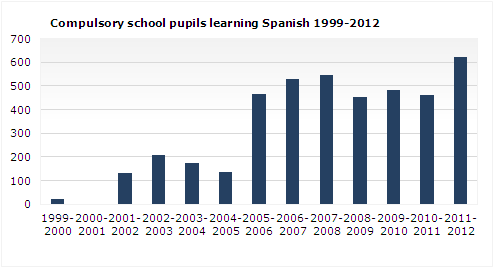 About the data
Data on compulsory schools are collected once a year for the whole school year, while data are collected twice a year from upper secondary schools. However, the data on upper secondary students only include students studying foreign languages in the spring who are registered students in the autumn semester of the same school year. Information is only collected on living foreign languages. Students in Latin, classical Greek and Esperanto are therefore not included.

Go back
Use of this press release is free. Please quote the source.
For further information please contact information@statice.is, tel. +354 528 1000