Household work during the Covid-19 pandemic

These experimental statistics are preliminary results on the division of household labour, time spent in carework and household tasks as well as the effects of the pandemic from EU-SILC for Iceland. Results are based on eight questions added to the EU-SILC questionnaire in 2021, in collaboration with the Prime Minister‘s Office. More information on the research and the questions are found in the metadata section.

Results are analysed by gender, whether there are children in the household or not and if the family lives inside or outside the capital area. Results are weighed by gender, income, degree of urbanization, age and education.

Covid-19 has had wide effects on all levels of society and these effects are different for different groups of people. Increased time spent at home with teleworking and diminished school and leisure programmes for children, raised questions on the gendered effects of the epidemic within the household. These results are meant to cast light on these effects.

Increased burden on families with children during Covid-19

More time spent in housework outside the Capital region

Women spend 9.2 hours in housework on average and men 7.1 hours, single people spend less time in housework than cohabiting and married people, and couples with children less than couples without children. Such factors have a little more effect on women than men though, e.g. women in coupled households with children spend 2.8 hours more on housework a week than their counterparts that do not have children, while the difference for men in the same situations is 2.4 hours.

Chart 1 depicts estimated total time couples spend on housework. As expected the total for couples with children is higher than the total for child-free couples but the chart also shows that couples that live outside the Capital region spend more time on household work than couples in the capital region. 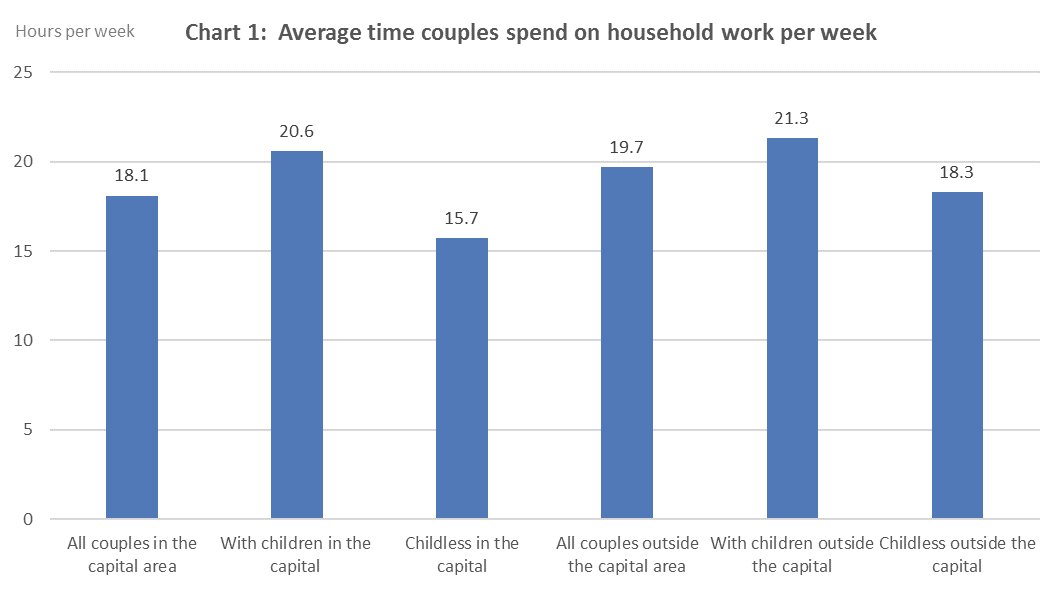 Women spend 10 hours on caring for children and other family members in a typical week and men just under 8 hours. These averages have a limited informative value though as is evident when people with children in the households are compared with people in childfree households. Women and men with children spend 22 hours and 17 hours on care work per week, respectively, while their child-free counterparts spend under three hours irrespective of sex. Whether or not the household is in the Capital region does not matter for time spent on care for childless couples, that spend under 6 hours per week in care in general. For couples with children, however, there is almost a three hours difference as the total time couples with children outside the Capital region spend on care work is above 46 hours while their counterparts in that region spend under 44 hours.

Men happier about their contribution to housework

Care has to be taken not to confuse fairness and equality in this context. As an example, a couple can divide household work such that one does everything while the other does nothing within the household and this division is considered fair by both parties while not equal. 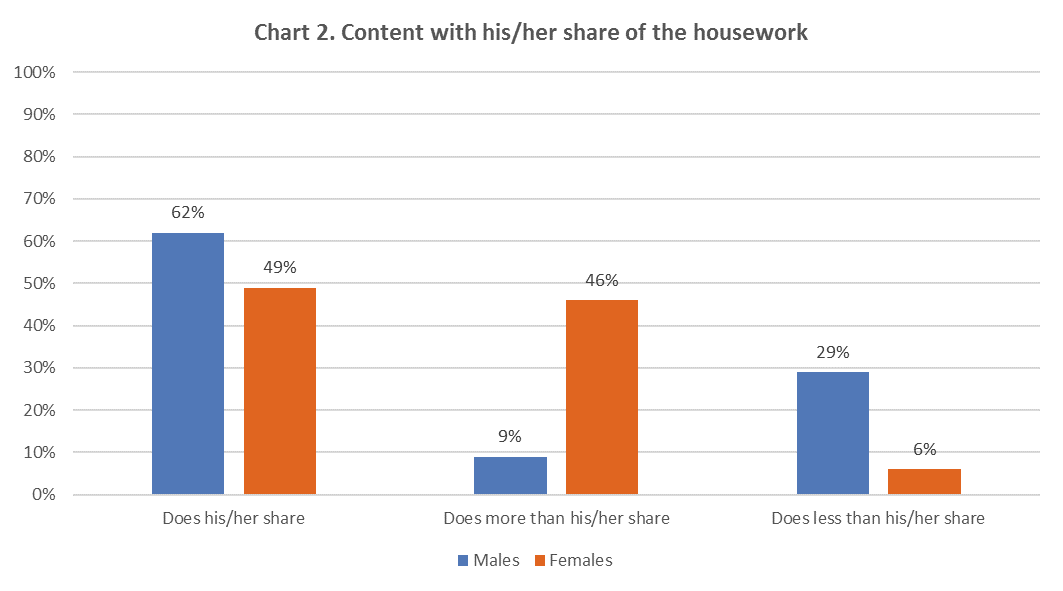 Use of these experimental statistics is free. Please quote the source.
For further information please contact thora.k.thorsdottir@hagstofa.is, tel. +354 528 1285