Income statements and balance sheet for agriculture are now published for growing of crops and plant propagation. The statistics are based on data from annual tax statements and agriculture tax documents and presented in the standard format of income statements and balance sheets. Farms are classified according to the NACE standard for statistical classification of economic activities on the basis of declared activity and sources of income from agriculture as stated in tax returns. Each farm is thereby assigned a classification number associated with the type of farming that yields the most income from agriculture.

In 2017 there were 202 farms with growing of crops and plant propagation as the main economic activity. Their income amounted to 6.1 billion ISK and 93% of income originated from sales of agricultural products. Expenses were 5.5 billion ISK. 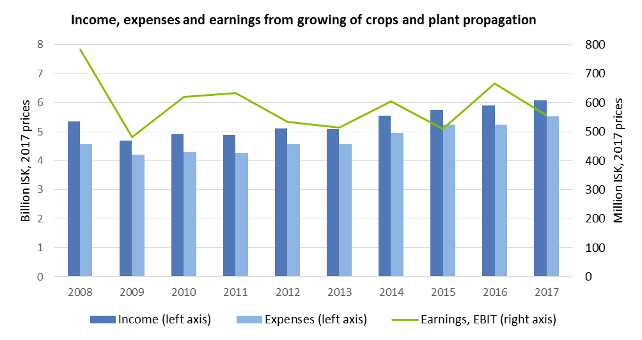 The majority of farms and most of the income for the above-mentioned types of farming belong to growing of other vegetables, roots and tubers. This type of farming includes growing of leaf and stem vegetables, carrots, turnips and mushrooms. Their income was 2.3 billion ISK in 2017, and had declined by 138 million ISK (5.7%), but expenses remained the same and amounted to 2.2 billion ISK. In 2017, income of farms engaged in in growing of potatoes (by main acivitiy) was just over 1 billion ISK and had increased by 146 million ISK (17%) from the previous year. Despite expenses also increasing by 56 million ISK (8%) by the same measure, earnings before interests and taxes (EBIT) improved by 90 million ISK (60%) and totaled 240 million ISK. There were 19 farms that had growing of growing of fruit bearing vegetables and capsicum (including cucumber and tomatoes) as their main economic activity in 2017. The income of these farms was 1,238 million ISK, which was a 15 million ISK (1%) increase from the year before, given constant 2017 prices. Expenses increased by 87 million ISK (8%), for them most part due to an increase in labour costs by 66 million ISK (16%). Following is a summary of statistics for farms engaged in growing of crops and plant propagation.