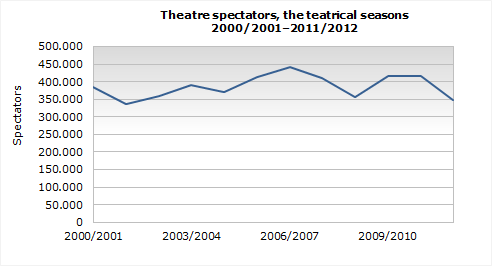 Professional theatre groups
There were 61 professional theatre groups operating in the country in the last theatrical season. The groups staged 91 productions within the country, thereof 15 were staged jointly with theatres. Performances numbered 799. The total number of guests was 102,753, including spectators to co-productions with theatres, or 50 thousand fewer guests than in the previous theatrical season.

Statistics Iceland collects annually information from the theatres and the theatre groups.