Statistics Iceland publishes now for the first time data on labour productivity for the whole economy and individual sectors as new data on labour market quantity measures becomes available. The new labour market data is the result of an extensive development project aimed at producing new estimates of number of jobs, number of employees and number of hours worked.

Labour market statistics published by Statistics Iceland so far has been based on the Labour force Survey (LFS) playing a key role along with the Icelandic Survey on Wages, Earnings and Labour costs (ISWEL) and the register data from tax returns and current income. The new data is compatible with national accounts standards and is compiled by making use of available micro data as well as information contained in the above mentioned surveys. By pooling all these data sources, estimation of individual based labour market characteristics is produced.

Main highlights
For the first time data on the number of jobs is now available for employees and self-employed. A job is defined as an explicit or implicit contract between a person and a resident institutional unit to perform work in return for compensation for a defined period or until further notice. In 2008, the number of jobs for the year as a whole was 181.5 thousand, falling to 164.7 thousand in 2010. From then on the number of jobs has risen to 209.3 thousand in Q3 2017, with average annual increase of 4-5% since late 2015. 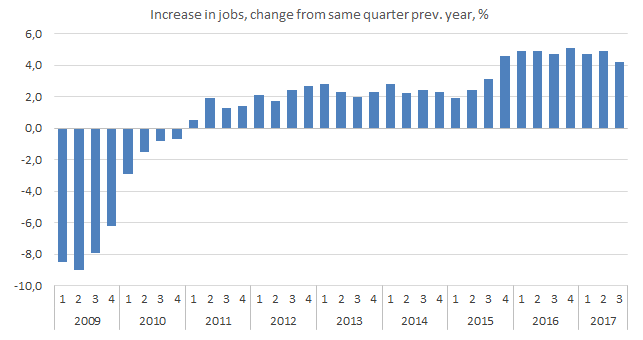 Statistics Iceland has published data on the total number of persons in employment based on results from the Labour force survey as well as the number of employees as a part of structural business statistics. With improvements on-going in this area and a new release expected soon, a consolidation with regard to labour market statistics will take place.

According to the new data, total employment fell more in the aftermath of the financial crisis than previously recorded. However, since 2010 the development of total employment in the economy is very similar by both measures.

As regards the total number of hours worked, the most common measure of economy-wide labour input, the new data shows substantially lower number than previously published, the difference being 16-22% for the period 2008-2016. Two possible explanations have been suggested. Firstly, in the Labour Force Survey individuals are asked to report the number of hours worked in the reference week, allowing for over reporting due to a strong work ethic in the Icelandic society. With no established empirical estimate, this hypothesis remains an open question.

The other possible explanation for the difference is the absence for unreported work in register databases. The size of the black economy is uncertain, and individuals surveyed in the Labour Force Survey may well report hours worked in the black economy if relevant. With the new method, this part of the labour market will be omitted in this publication.

With this substantial reduction of total hours worked in the economy, the relative position of Iceland in international comparisons will change, underlining the importance of caution in comparing statistical concepts across countries.

Overall, productivity increased by 7% in 2009 relative to the previous year, reflecting the economic situation in Iceland following the financial crisis. It seems that companies were able to respond to the crisis by improving their performance initially but lost some of the productivity gains in the following years. From 2014 overall productivity increases have been accelerating. 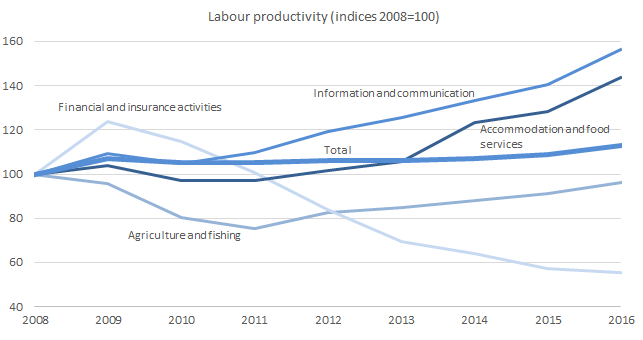 Individual sectors perform differently, with financial and insurance activities showing a particularly strong decline in labour productivity throughout this period. The development of the financial sector is directly related to the particular situation of this sector in the aftermath of the financial crisis and the way national accounts measure output of financial firms. Gains from revaluation, which have dominated bank performance in recent years as banks restructured their loan portfolios, are not included in the national account output measure of financial firms. Consequently, the contribution of the banks to Gross Domestic Product has fallen significantly, even though employment in the financial sector has remained elevated. Recently, however, with bank employment falling, a change may be forthcoming.

Productivity in agriculture and fishing also fell significantly until 2011, primarily caused by falling output in the fishing sector. During this period employment in fishing remained unchanged or even increased. It should be noted in this respect that operating conditions in the fishing sector improved significantly following the financial crisis as the exchange rate of the Icelandic Krona depreciated strongly. Under such circumstances, temporary fluctuations in output can easily be absorbed and increased labour demand may reflect structural or long term objectives.

Construction is among the most volatile sectors in the economy and recent experience is no exception. However, productivity performance since 2008 has been rather good as the strong fall in output in 2009–20012 was matched by an even stronger fall in labour input. Since 2013 the tide has turned with output rising once again as the economy recovered, but the productivity gains already obtained have remained intact.

Significant productivity gains are recorded in commerce, transport and accommodation and food services, as well as in information and communication sectors. In this respect the tourism and high-tech industries have performed well. It is primarily the public sector that has remained behind as productivity enhancements may not be as easily obtained due to the lack of competitive pressures.