Business Demography Statistics are new statistics and were designed to provide a detailed analysis of business population and to provide an image of quantitative and qualitative aspects for various NACE divisions/groups and their development over a longer period of time. Business Demography Statistics keep track of data on the number of active enterprises, births and deaths of enterprises and enterprises that survive through the first, third and fifth operational years after their birth, as well as data on turnover and persons employed. The statistics cover the period 2008-2017 and are broken down by industry according to ÍSAT2008.

Business Demography Statistics are based on Eurostat and OECD harmonized methodologies. Therefore, they are comparable to statistics in other European countries. The statistics are based on tax returns of enterprises and individuals. It covers the private sector except agriculture, financial and insurance services. Public administration, health and social services, educational activities, cultural, sporting and recreational activities, as well as NGO activities are excluded.

The majority of enterprises born in 2012 were in professional, scientific and technical activities, approximately 600 enterprises. However, in 2017 only 225 were still active. 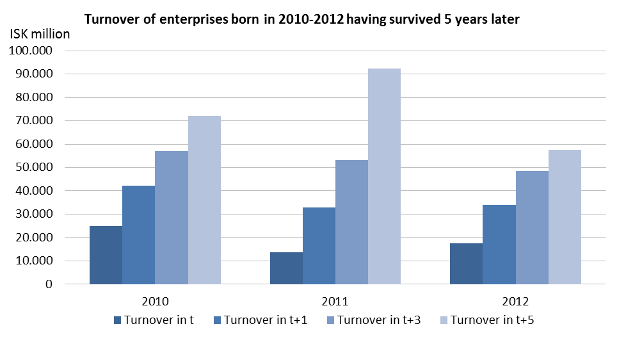 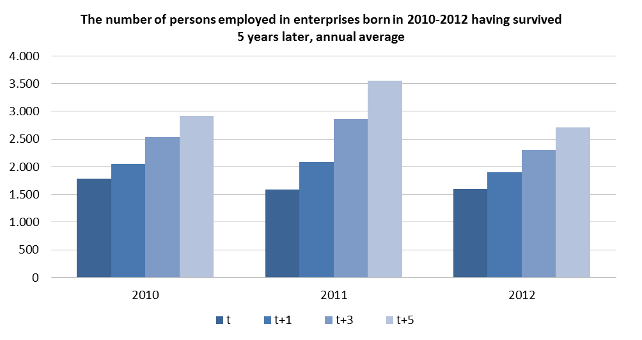 More data on Business Demography Statistics will be published on the 23rd and 25th of January.

Enterprises considered being active when they have operating income or personnel costs. When operation of enterprise moves between identification numbers, it is not considered to be an enterprise birth unless two of the following three conditions are met; operation is in another economic sector according to ÍSAT2008, operation is carried out at another location or the majority of staff has been changed. Adjustments are also made in connection with mergers and split-offs.

All amounts are at current prices.