Air transport continues to be the largest emitter until 2018

Emission of greenhouse gasses, measured in warming units (CO2 equivalences), from the Icelandic air transportation economic sector grew by 27% between 2016 and 2017. An estimate of emissions for this sector for 2018 shows that they increased by 5% since 2017. Estimates for 2019 will be available in early 2020. 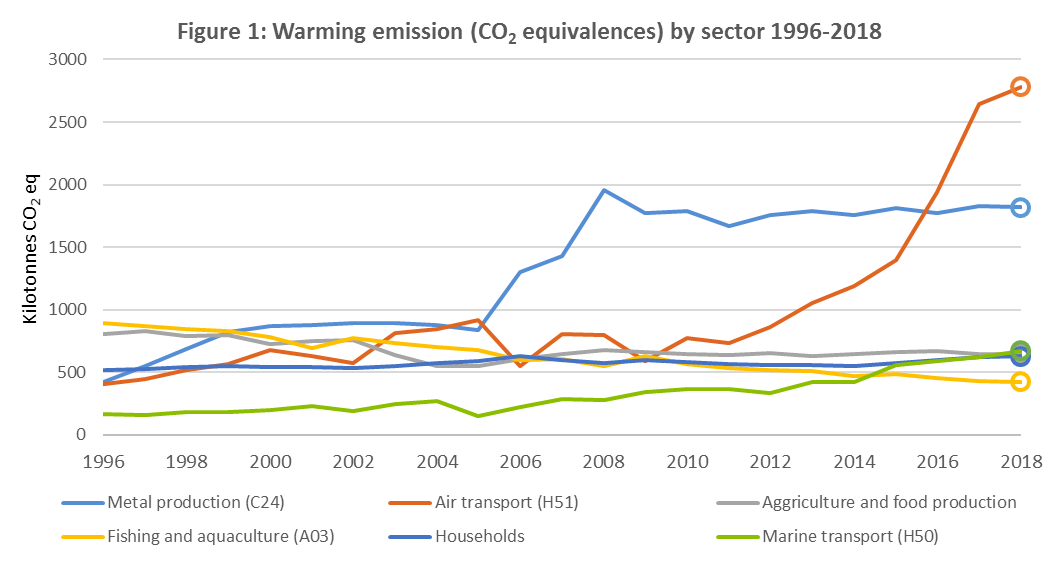 Import of raw material and export of products from heavy industry indicates that emissions from this sector remained stable between 2017 and 2018. The metal industry sector has received much attention recently due to the proposed constructions of silicon metal refineries. The projected emissions from these will be 1,080 kilotonnes of CO2 if the industry reaches the currently approved level of production. This value comes from the mandatory environmental assessment documentation submitted for approval. This emission will then be added to the current level of 1,819 kilotonnes equivalences, adding 60% to the current total.

(1) Values are estimates
(2) Road transport of tourists is not a part of the AEA account, but incuded here in order to a scope of the direct effect of tourism

Emission of warming equivalences has increased noticeably in the recent years from the marine transport economic sector. This increase is simultaneously due to increased use of fossil fuel in the sector and increased use of refrigerated containers, which contain greenhouse gasses with high warming potential. The sector contains both marine shipping operations and tourism vessels, as long as they are operated by companies residing in Iceland. Shipping vessels and large luxury passenger ships operated by companies that do not reside in Iceland do not contribute to the emissions from the Icelandic economy. Emissions from marine transport increased by 253.8 kilotonnes equivalences, or by nearly 70% between 2010 and 2017. The tourism boom in Iceland also took place during this time period.

A model based on import of marine fuel, number of vessels in operation and engine power of the fleet projects that emissions from this economic sector will supersede emissions from agriculture and food production, where methane generation from cattle and other livestock primarily effect global warming. 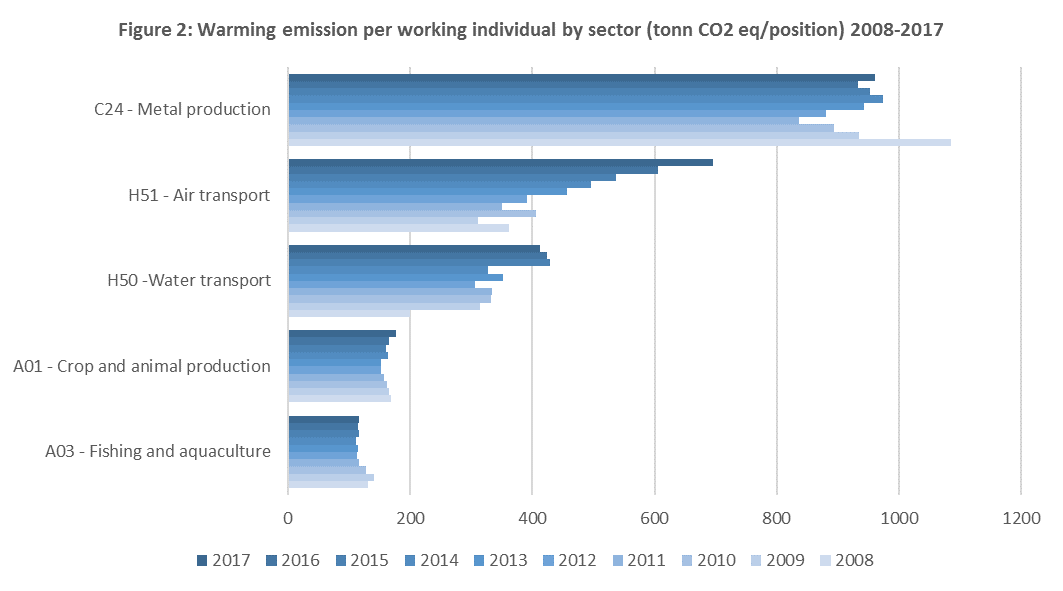 About the numbers
The Air Emission Account (AEA) is an account for emissions of greenhouse gasses that arise due to economic activity and households within the Icelandic economy. The AEA does not limit emissions occurring only in the land space of Iceland. The emission account is based on the UNFCCC National Inventory Report (NIR) of Iceland, which the Environmental Agency of Iceland compiles. The NIR is the official document used for climate agreements that Iceland has signed. In addition, the AEA is calculated from information from the National Energy Authority, the Directorate of Customs and the Icelandic Transport Authority.
The estimate for 2018 is based on import quantities of key consumables and exports of key products per industry, production reports, and information about real estate holdings for the same industry. This information, along with the reported emissions, is then used to adjust a model that predicts emission values where reports are not complete.
Emissions are classified according to the economic activity from which they originate from or the final point of release. This means that all emissions due to waste breakdown are associated with the waste management sector rather than the industry that generates the waste. Similarly, emissions due to electricity use are attributed to the electricity producer. The classification follows the division of the NACE classification system used in the national accounts.
Warming units are reported as mass equivalences of CO2. Each greenhouse gas has its own global warming potential (GWP), which is a measure of how much infrared radiation the gas absorbs in comparison with carbon dioxide over a 100-year period. The global warming potential is evaluated by scientific methods and published on at regular intervals by the International Protocol for Climate Change (IPCC). GWP values from the fifth publication (AR5) were used in these calculations. Warming units are not the same as CO2 emissions, which primarily originates from combustion of hydrocarbons. Other gasses, such as fluorinated gasses, methane and nitrous oxides, can contribute substantially to the warming unit emissions from different industries. The actual mass values of gas emissions are available in online data repositories on the Statistics Iceland website.

Go back
Use of this press release is free. Please quote the source.
For further information please contact umhverfistolfraedi@statice.is, tel. +354 528 1278