47% of packaging waste to recycling

The estimated quantity of packaging waste in 2019 was 53,742 tonnes, which equates 151 kilograms per capita. In the same year, 25,406 tonnes of packaging waste were recycled or reused, which translates to a 47.27% rate of recycling.

This rate of recycling is somewhat lower than it was in 2018 (51%) but on par with other years where the average was 45%. Of the recycled material, only 528 tonnes were recycled or reused within Iceland. The remainder was exported. Recycling and reuse within Iceland have been steadily shrinking in the past few years.

Packaging waste includes any type of paper, cardboard, plastic, wood, glass or metals with a recovery or recycling fee added to the price of the material. This recycling fee can be recovered if the packaging is returned to recycling. The material is only considered recycled if it is received by an approved processor. The amount of waste is estimated from the average of the import of packaging in the previous three years. 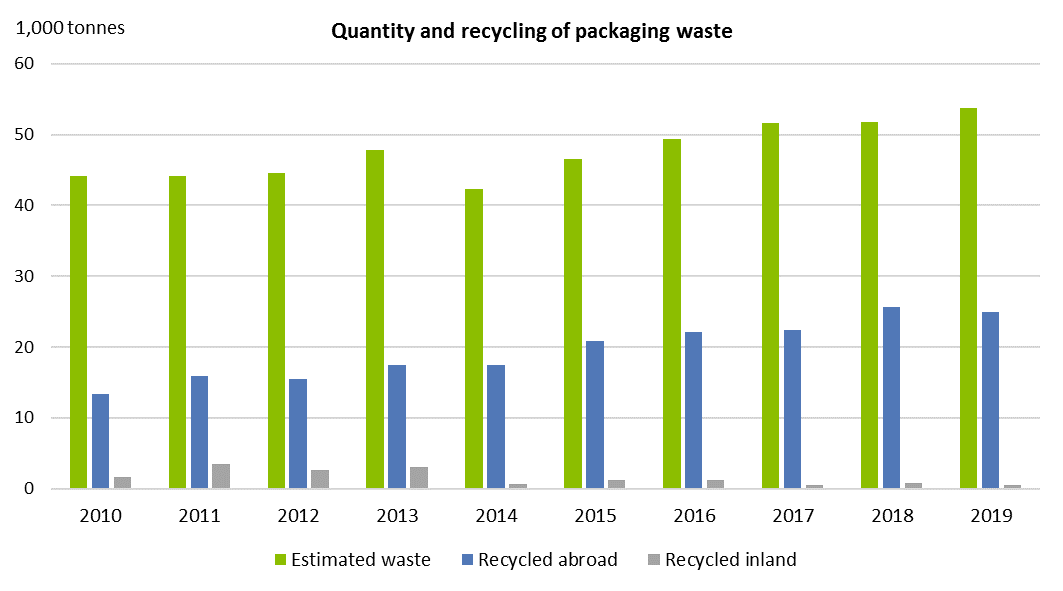 Although plastic packaging is much discussed, plastic is only 32.4% of the estimated total packaging waste. Paper and cardboard are estimated to be 39.4% of the total and glass is 18.4%. The recycling rate of plastic is, however, considerably lower than the average rate of recycling. The estimated quantity of plastic packaging waste was 17,492 tonnes, but only 4,406 tonns were recycled (25.2%). At the same time, the recycling rate of paper and cardboard is 83%.

These numbers are part of recently published data on the data repository of Statistics Iceland. The data has heretofore been accessible on the data repository of Eurostat, but has been republished and corrected for publication at the Statistics Iceland repository. In addition, data on the processing of electronic waste, batteries, and charge collectors and the processing of waste vehicles is now also available on the repository.