Balance of trade
In January 2019, the value of exported goods from Iceland amounted to ISK 59,400 million fob and the value of imported goods amounted to ISK 52,500 million fob (ISK 56,300 million cif). Thus there was a trade surplus, calculated on fob value, of ISK 7,000 million as compared with a trade deficit of ISK 2,800 million in January 2018, at current rates of exchange.1 Excluding ships and aircrafts the surplus of balance of trade in goods was ISK 4,700 million in January 2019, compared with a deficit of ISK 2,700 million in the same month the year before. This is the first time since October 2016 that there is a surplus for trade in goods.

Exports
In January 2019 the value of exports was ISK 11,100 million higher than in January 2018 or 22.9% higher at current rates of exchange. The increase is mainly due to increased value of marine products and manufacturing goods. Exported manufacturing goods were 51% of exported goods and their value was 12.8% higher compared with the same month the year before. Marine products were 37.5% of total exported goods and value grew by 24.6% between years.

Imports
The total value of imports of goods in January 2018 was ISK 1,300 million higher (2.6%) than the year before, at current rates of exchange, mainly because of increased imports in food and beverages. 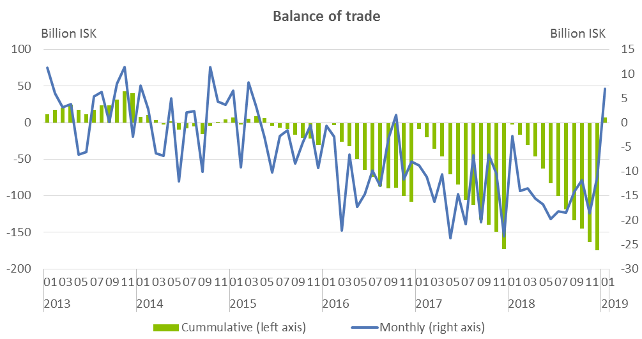