For the period February 2020 to January 2021, the deficit in balance of trade in goods was 146.8 billion ISK or 52.2 billion ISK less than for the previous 12 months. Changes from published preliminary figures for January 2021 are due to additional import data arriving from customs after the publication. Statistics Iceland is working on increased timeliness to minimize the difference between preliminary numbers and numbers published at the end of each month.

For the period February 2020 to January 2021, the total value of exported goods was 623.2 billion ISK or 10.9 billion ISK higher (1.8%) than in the 12 months prior at current rates of exchange. Increase in exports was mainly due to exported marine products. Marine products contributed 43.1% of total exported goods and increased by 12.7 billion (5.0%) from the previous 12 months. For the same period, manufacturing products contributed 48.3% of the total exports and their value stayed relatively the same.

In the last 12 months, the total value of imports of goods was 770 billion ISK, 41.2 billion ISK lower (5.1%) than in the previous 12 months at current rates of exchange. The biggest difference was the contraction in fuel imports.

Changes in reporting
Statistics Iceland traditionally reported trade in goods balance on FOB value.1 With the first publication of 2021, data changes according to international standards for trade in goods statistics. From now on, Statistics Iceland will calculate the trade in goods balance from export FOB value and import CIF value.2 The new table, The value of exports and imports by month (FOB/CIF) 2011-2021 (UTA06001.px), is now available on the Statistics Iceland website. The new table replaces the tables The value of exports and imports by month (FOB/FOB) 2010-2020 (UTA06004.px) and External trade, preliminary figures of current month (UTA01100.px). The new table shows CIF import numbers as well as an expanded view of the previous preliminary table. Additionally Statistics Iceland will focus on a 12 month moving annual total comparison of data as well as reporting on the latest month available. 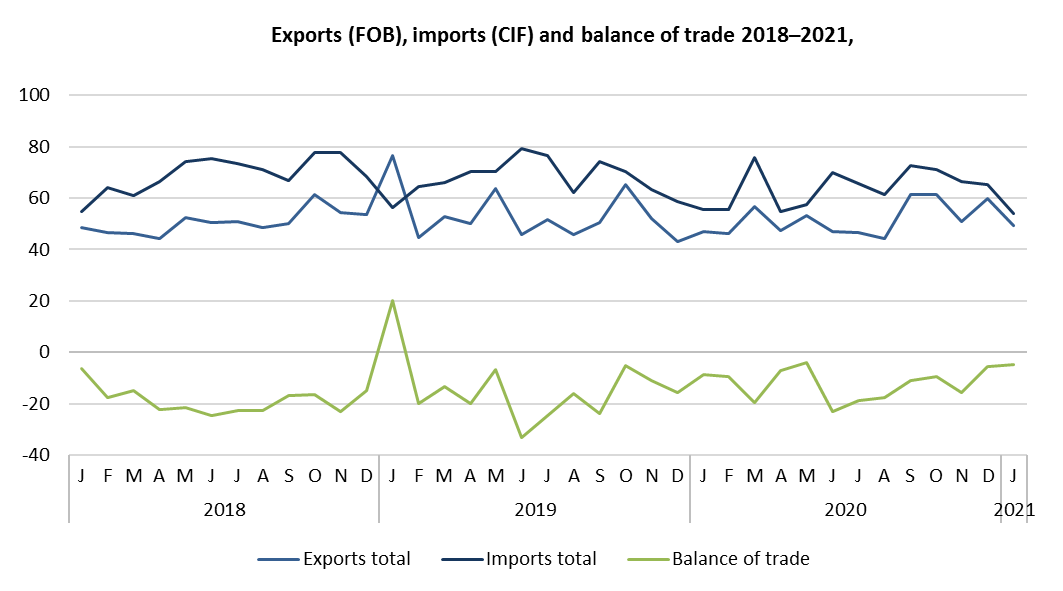 1 FOB (Free on board): Value of exports and imports of goods is the value of the goods at the exporter's customs frontier
2 CIF (Cost insurance and freight): FOB value plus costs induced until the item is unloaded in the country of import. This chiefly involves freight rates and insurance costs.