The two most common causes of death in the period 2008–2017 were diseases of the circulatory system (34%) and neoplasms (29%). The third and fourth most common causes were diseases of the nervous system (9.5%) and the respiratory system (8.7%), respectively. Statistics Iceland has published new data on causes of death, for the period 2016 and 2017. The data are based on classification of death certificates of all persons who died during this period with a legal domicile in Iceland.

Causes of death are dependent on age. For 0–34 year olds, the most common cause of death was external corresponding to 54% of all deaths in the age-group. Gender differences are substantial as 61% of men die of external causes versus 38% of women. The most common cause of death for 35–64 year olds is neoplasms or 46%. There is a difference between the sexes as more women (59%) die of neoplasms than men (37%) in the age-group. However, it should be noted that deaths are relatively fewer for people under the age of 65, or 17% of all deaths in the period 2008–2017. For 65–79 year olds, neoplasms is still the most common cause (43%) and circulatory diseases second most common (28%) while the order of other causes of deaths is the same as for the total population. 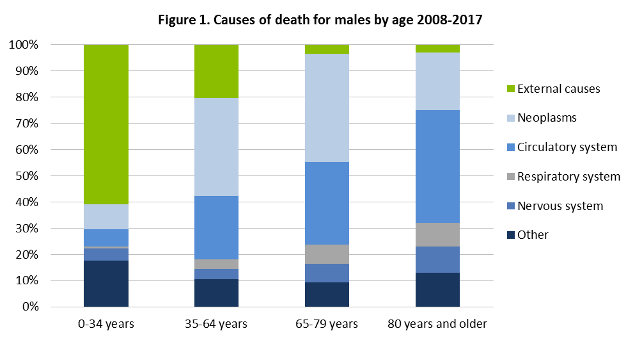 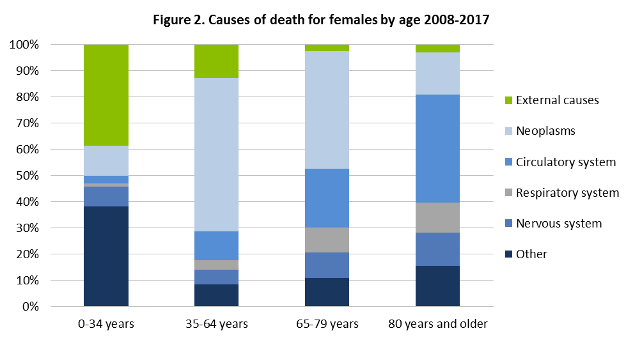 Deaths caused by the nervous system increased by 96% from 1998–2017
The totals and percentages of each cause of death depend on the age structure of the population. In order to study development over time as well as a cross-country comparison, statistical offices use standardised death rates (per 100,000 inhabitants of the Eurostat-2013 standard population). The cause of death that increased the most from 1998 to 2017 were due to diseases of the nervous system, increasing from 51 per 100,000 inhabitants in 1998 to almost 100 in 2017. This is due to an 11% increase in the proportion of 85 year olds and older during the time period as diseases such as Alzheimer’s and Parkinson’s, belonging to this group, are more likely to affect older people. The standardised rates for deaths caused by the circulatory system decreased by 44% (from 478 to 268 per 100,000 inhabitants) from 1998–2017. 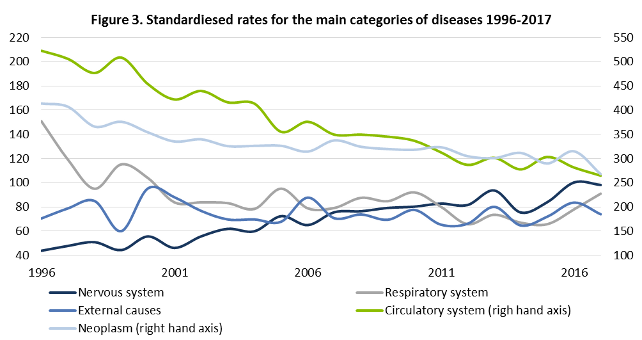 Mortality rates for malignant neoplasm developed in a similar fashion with a 27% decrease in the past 20 years. About a quarter of all deaths due to neoplasm are attributed to malignant neoplasm in the trachea, bronchus and lungs. Its rates have fallen somewhat for both sexes, especially in recent years and the standardised death rate for the sexes was similar the last two years. This is quite a different development than in other European countries where causes of death due to malignant neoplasms in the trachea, bronchus and lungs are more than two times more common in men than women, based on recent data from Eurostat in Figure 4. 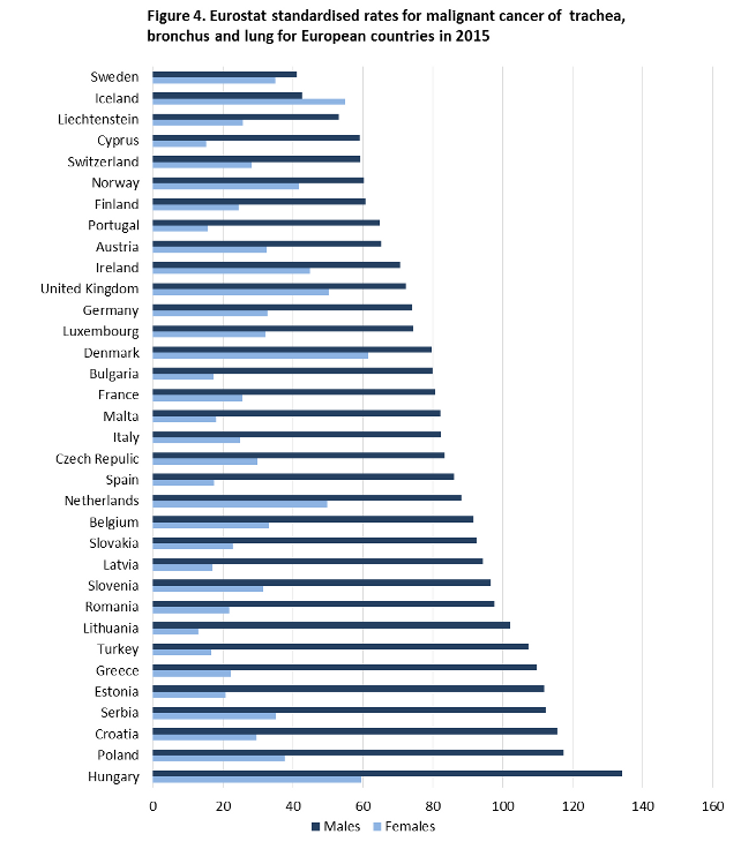