Modal age of the emigrants was 24 years
The most frequent age group among those who emigrated in 2012 was 20–24 years old. The modal age, however, was 24 years. Immigrants were younger than emigrants, the highest number was in the 25–29 year old age group, and the modal age was 26 years. Considering net migration, the age group 30–34 years experienced the highest negative net migration. 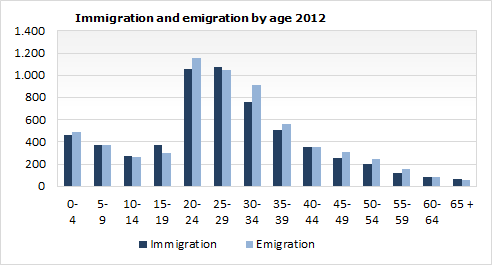 Sex ratio stabilises
A significant change in the sex ratio of international migrants has taken place in recent years. Up until 2003 more females than males migrated every year to Iceland. This changed dramatically between 2004 and 2008 when 4,215 more males than females immigrated to Iceland. In the four years since the trend was reversed with 4,114 more males than females emigrating from Iceland in excess of immigration.