Advertising revenue of domestic media in 2018 amounted 13,4 billion ISK in 2018, or two per cent less than in the previous year, in fixed prices. The advertising revenue of the media was on a pair with the year 2004. Newspapers (dailies and weeklies) were the most important advertising medium retaining over 30% of the total. Cautiously estimated, payments for advertisements in foreign media, thereof mostly on the web, were over 5 billion ISK, or about 38% of the total expenditure in 2018. The Icelandic advertising market displays some important and particular traits compared with the Nordic countries. Newspapers and radio in Iceland capture significantly higher share of the total advertisement revenue.

Advertisement payments to domestic media in 2018 were about one fourth lower than when at all-time highest in 2007, or some 5 billion ISK in real fixed prices. Overview of the trend of advertising revenue of the domestic media in the years 1996–2018 is depicted in figure 1, shown as indexes in current and fixed prices. 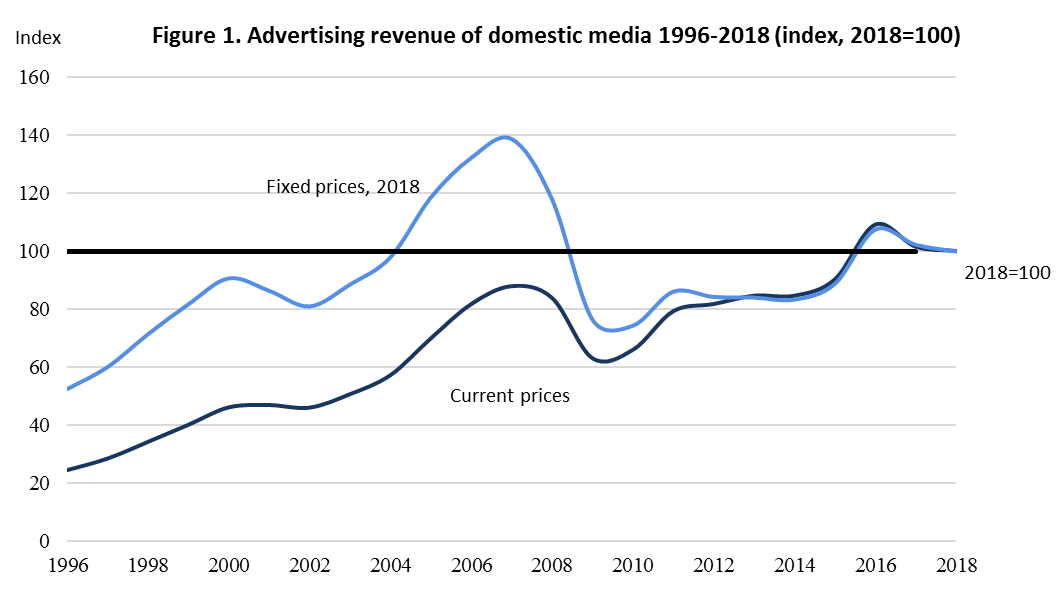 The advertising revenue of the domestic media is still a long way from recovering from the slump in the wake of the financial crisis in fall 2008.

Three of every ten ISK paid for advertisements in the domestic media in 2018 went to daily and weekly newspapers, which are the single most important advertising medium in Iceland. Second most important was television with 21% share, then radio with 18%, and the web with 14%. Share of other media was significantly lower (see figure 2). 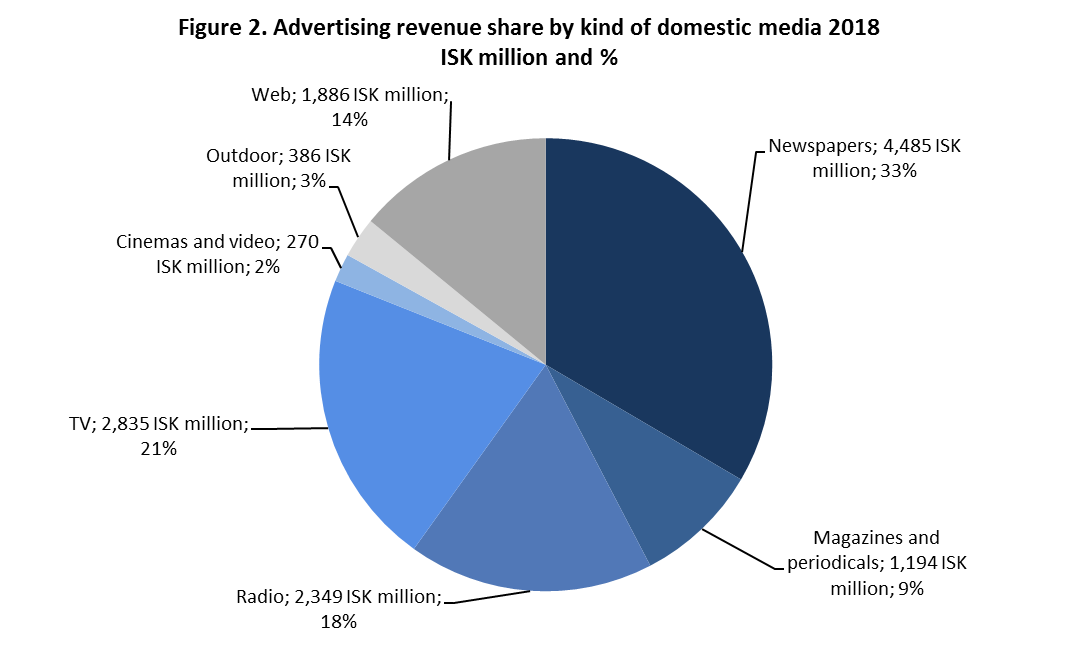 Since 1996, the division of the advertising revenue share between different kinds of media has changed, largely at the expense of dailies and weeklies whose share has lowered from 57% down to 45% of the total. This can largely be explained by two interrelated factors. On one hand to the advent and increased importance of the web media and, on the other hand, to general downturn in circulation and reading of newspapers.

Advertising expenditure to foreign web sites is excluded in these figures. Information about advertising revenue of non-domestic media carrying advertisements aimed at locals are not available. Fewest of the foreign companies settle for payments of the VAT to the Icelandic tax authorities. Among them are the big actors in web advertising, Google and Facebook. It can, however, be cautiously estimated from information of purchase of services from foreign companies that netto payments to foreign media did amount over 5 billion ISK in 2018 or 73% of total expenditure on web advertising.

The stronghold of the daily and non-daily newspapers as an advertising medium is much higher in Iceland than in most of the Nordic countries, but comparable to in Finland. Moreover, particular traits of the Icelandic market are obvious when share of radio is reviewed. Radio in Iceland is much stronger than in the neighbouring countries and conversely. However, similar share of advertisement expenditure goes to the web in Iceland as in Finland, but significantly lower than in the other Nordic countries.

This discrepancy owes much to different historical circumstances and developments. The public service broadcaster, RÚV, has from its inception in 1930 been allowed to carry advertisements, first in radio and later in television as well, conversely to in most European countries. Likewise, unequally strong position of newspapers on the advertising market in Iceland can be related to the fact that the daily national papers cater to the population mostly independent of residence, reversely to in many more highly populated countries which many are heterogenic and diverse in cultural matters (i.e. language, religion, etc.). Moreover, free newspapers are much more important in Iceland than in most other countries, both as regards distribution and reading (see Newspaper Innovation), which in turn increases their importance as a courier for advertisements.

About the data
Information about advertising revenue of the media are derived from annual accounts and according to information from The Icelandic Media Commission from 2011 and onwards (previously from Statistics Iceland). In the instances when information is lacking from media operators the advertising revenues are estimated from VAT tax reports. Hence, it must be kept in mind that the figures are partly based on estimates. The data do not include catalogues and directories, direct marketing, and direct and multiple mail, or advertising on non-domestic web sites. Sponsoring is included. Certain reservation should always be kept in mind concerning comparison and interpretation of international advertising market data. Methods of collecting and measurements vary highly between individual countries and are thus based on estimates and an educated guess. This applies not least to the web.