** Herfindahl-Hirschman Index. It is defined as the sum of the squares of the market shares of the firms within a given industry. The index ranges from 0 to 10,000. Increases in the index generally indicate a decrease in competition and an increase of market power, whereas decreases indicate the opposite. It is common to interprete the index as thus: scores below 1,000 is a indication of a diversified market; scores between 1,000 to 1,800 is a indication of a medium concentration; scores above 1,800 is an indication of high market concentration.

The Herfindahl-Hirschman Index (HHI) confirms unequivocally that the distribution of advertising revenues between media companies is greatly unequal. In general, the reference value of the HHI used by media market inspectors and competition authorities for great market concentration is 1,800. In 2017 this index was above 2,000 points in most cases, thus showing high market concentration. 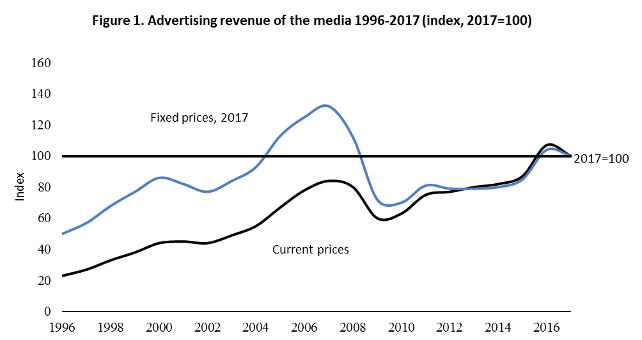 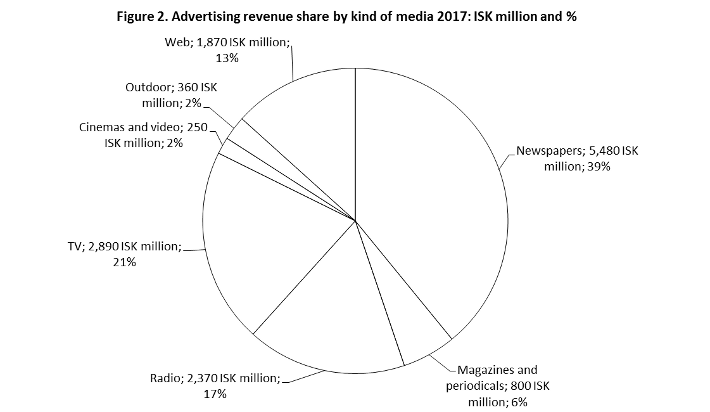 Over a period of twenty years, the division of the advertising revenue share between different kinds of media has changed, largely at the expense of the print media whose share has lowered from 60 down to 45 per cent of the total. The share of the dailies and weeklies has slumped from 51 per cent down to 40. This can largely be explained by two related factors, the advent and increased importance of the web media on one hand, and to the general downturn in circulation and reading of newspapers on the other.

Advertising expenditure to foreign web sites is excluded in these figures. Cautiously it can be estimated that Icelandic advertisers spend between one fifth and one fourth on foreign websites, derived from various information (The Media Commission and Statistics Iceland). This is substantially lower than in the neighbouring countries, which in turn can be attributed to specific traits of the Icelandic media market.

Moreover, particular traits of the Icelandic market are obvious when share of radio and the web are reviewed. Radio in Iceland is much stronger than in the neighbouring countries and conversely, much lower share of advertisement expenditure goes to the web in Iceland than elsewhere.

This discrepancy owes much to different historical circumstances and developments. The public service broadcaster, RÚV, has from its inception in 1930 been allowed to carry advertisements, first in radio and later in television as well, contrast to what happened in most European countries.

Likewise, unequally strong position of newspapers on the advertising market in Iceland can be related to the fact that the daily national papers cater to the population mostly independent of residence. This is in contrast to the typical situation in more highly populated countries many of which are heterogenic and diverse in cultural matters. Moreover, free newspapers are much more important in Iceland than in most other countries, both as regards distribution and reading (see Newspaper Innovation), which in turn increases their importance as a courier for advertisements.

1This can partly been attributed to effects of the European Soccer Tournament 2016 and participation of the Icelandic National Team in the semi qualifier. Television events like these have shown to induce advertisement expenditure, especially on TV.

About the data
Information about advertising revenue of the media are derived from annual accounts and according to information from The Icelandic Media Commission from 2011 and onwards (previously from Statistics Iceland). In the instances when information is missing from media operators the advertising revenues are estimated from VAT tax reports. Hence, it must be kept in mind that the figures are partly based on estimates. The data do not include catalogues and directories, direct marketing, and direct and multiple mail, or advertising on non-domestic web sites. Sponsoring is included.

Certain limitations should always be kept in mind concerning comparison and interpretation of international advertising market data. Methods of collecting and measurements vary highly between individual countries and are thus based on estimates and an educated guess. This applies particularly to the web.