Admissions to theatrical screenings of full-length feature films in Iceland totalled nearly 1.4 million in last year, signifying three per cent decrease from the previous year. This equals 4.5 visits per capita. Film attendance has decreased about 12 per cent since 2009 (see figure). The number of spectators in the capital region decreased slightly in last year; in other areas the number of admissions decreased some 16 per cent between 2012 and 2011. Total Gross Box-Office (GBO) revenue amounted to 1,525 ISK million. 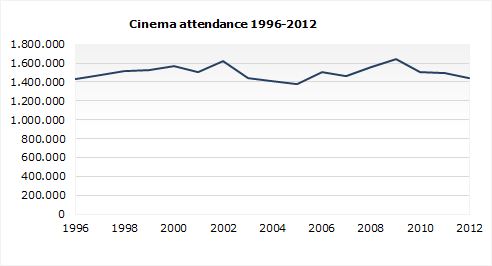 In 2012, 218 full-length features were shown in cinemas, thereof half were US productions. British, French, German and Nordic films added up to 29 per cent (7% from each country/region). In last year, 202 films were released for cinema running, thereof over 50 per cent US productions.

Measured in share of admissions, the market share of domestic productions was nine per cent and 11 per cent in GBO. Attendance to domestic films was some 13,000 on average.

US productions had far the highest share equally in admissions and GBO, or 71 and 82 per cent, respectively.

Last year there were 15 cinemas with 41 screens operating in ten municipalities. Total seating capacity was 6,942 and the average number of weekly showings was 1070.

Information about films and cinemas is from an annual inquiry among exhibitors and the database of SMAIS, the association of film rights-holders in Iceland on theatrical film showings from film distributors. The figures do not include film festivals and showings of documentaries and short-films.