The revenue of the media declined by two per cent in real prices between the years 2016 and 2017. The total revenue of the media was 27,900 million ISK. Revenue from users’ fees was nearly 15,000 million ISK and revenue derived from advertisements and sponsoring was over 13,000 million ISK. The total media revenue was about 18 per cent lower in 2017 than in the year 2006 and 2007 when at all-time high. Television captured half of the total revenue and dailies and non-dailies one fourth. Private media captured 78 per cent of the total media revenue and 84 per cent of the total advertising revenue in 2017 compared with 22 and 16 per cent market share of the public service broadcaster, the Icelandic National Broadcasting Service, respectively.

In the wake of the financial collapse in fall 2008 there was an appreciable slump in revenue of the media (i.e. newspapers, magazines and other periodicals, radio and television and web media). Between the years 2007 and 2010 the revenue of the media declined about a quarter, measured in fixed 2017 prices. Since, there has been a slight increase. Today the total revenue of the media is comparable to what it was around the turn of the century. Despite a substantial decline this is somewhat lower than the results are from other countries.1 The decline was more serious in revenue drawn from advertisements than in users’ fees and revenue related to direct sale to customers. Revenue derived from advertisements have fallen 28 per cent in real prices since its peak in 2006 and 2007. At same time, revenue from users has increased only one per cent (see figure 1). 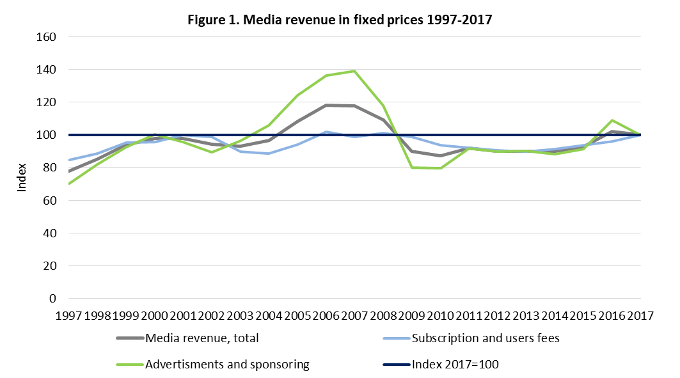 New patterns in media consumption are partly captured in changed share of different media in the media revenue over time as shown in table 2. In 2017, half of the revenue fell to television compared with 39 per cent in 1998. Radio’s share has changed only slightly between the years 1998 and 2017 or from 12 to 13 per cent. At the same time the share of magazines and other periodicals fell from nine to five per cent and the share of dailies and non-dailies dropped from 41 to 26 per cent. The share of the web media increased from one per cent to seven per cent in 2017. 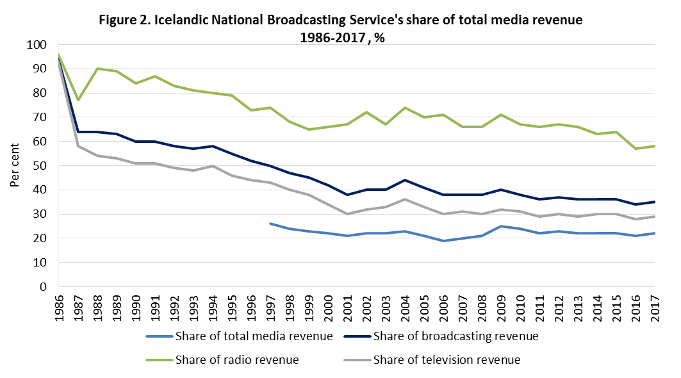 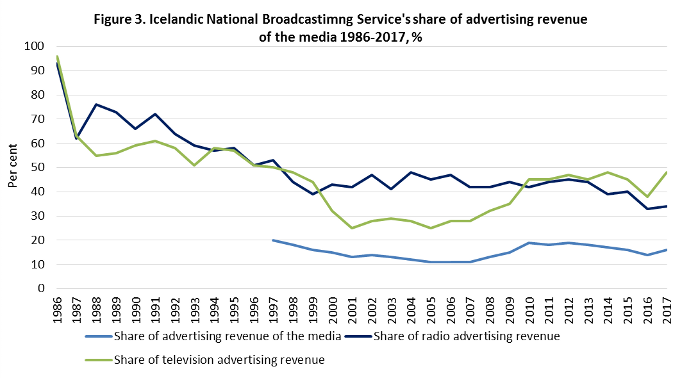 1 It is estimated that the fall in revenue of the US media in the aftermath of the banking crisis in 2008 was 40 per cent (R. G. Picard, The Economics and Financing of Media Companies. 2. rev. ed. New York: Fordham University Press, 2011).