The purchasing power of disposable income per capita increased by 2.6% in the first quarter

This is the first time Statistics Iceland publishes preliminary figures on disposable income of the household sector on a quarterly basis in accordance with the methodology of national accounts. This publication is a continuation of the first preliminary figures on an annual basis, published on April 26th 2021. Previously, the first results had been published around 15 months after the end of the reference period. Statistics Iceland will continue to publish revised figures when final information is available, e.g. tax returns from corporations and individuals. 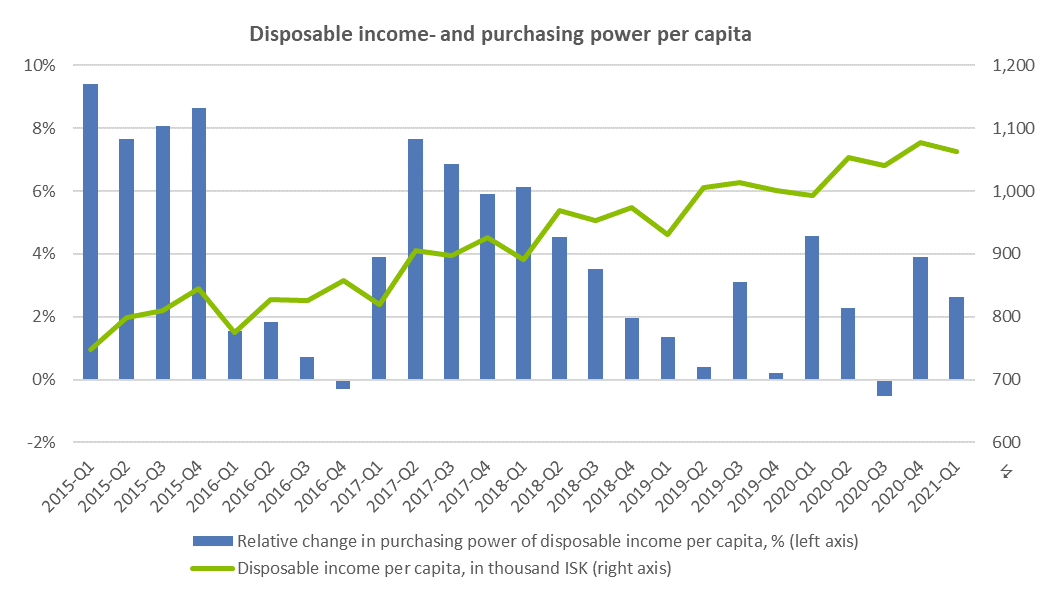 Social benefits other than social transfers in kind increased by 23%
Total income of the household sector increased by 8% in the first quarter of 2021, compared to the first quarter of the previous year. The largest increase was in social benefits other than social transfers in kind which is estimated to have increased by 23%, amounting to 18% of household total income in the quarter. The increase in retirement and pension income measured is largely due to a temporary permission to withdraw voluntary pension savings (third-pillar pension savings). The increase in social benefits is as well affected by measures taken to mitigate the economic effects of the outbreak and the rise in unemployment from Q1 2020.

Household disposable income is defined according to the European system of accounts (ESA 2010) as the sum of compensation of employees (D.1) receivable, property income (D.4), social benefits other than social transfers in kind (D.62) and other income which include output (P.1) and other current transfers (D.7), subtracted by property expenditure (D.4), taxes on income (D.5), net social contributions (D.61) and other expenditure which includes intermediate consumption (P.2), compensation of employees (D.1) payable, taxes on production and imports (D.2) and other current transfers (D.7) payable.

Data sources used for estimation procedures include PAYE (Pay As You Earn) tax register, preliminary accounts from Iceland Revenue and Customs, the Financial Management Authority and financial statements from local municipalities as well as data collected from the Ministry of Finance and Economic Affairs and the Central Bank of Iceland.