Liabilities, assets and net worth of individuals in 2012

Statistics Iceland now publishes a new edition of Hagtíðindi (Statistical series) with an analysis of individual liabilities, assets and net worth derived from tax returns in 2012. The main results are that liabilities increased by 1.9% from the previous year while assets and total annual income increased by 6.2% and 6.8% respectively.

At the end of year 2012, total assets amounted 3,969 billion ISK or 6.2% more compared to previous year. Couples with no children had the most assets of all family types with 1,595 billion ISK in total assets, which is a 7.6% increase from previous year. Families aged 60 years and older had the most assets of all age groups, 1,666 billion ISK or 42% of all assets in total, and their average asset also increased the most of all age groups, by 4.8%. 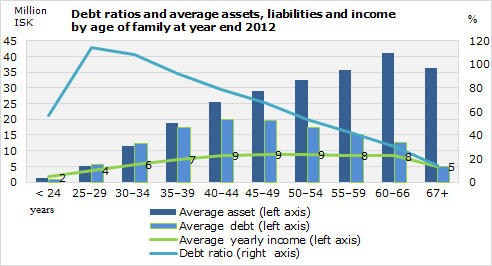 Families with positive net worth increased by 4% from previous year. The families that had the strongest equity position, i.e. the ones that belonged to the highest deciles, had 78.5 million ISK on average in net worth.

Liabilities, assets and net worth of individuals in 2012 - Statistical Series