The increase in real GDP in the 4th quarter of 2019 is consequently explained by the positive impact of foreign trade. Imports decreased by 10.2% in Q4, while exports increased by 0.5%. Exports of goods decreased by 3.1%, but despite a significant decrease in exported tourism and related services, total service exports increased by 3.7% in Q4, explained by increased exports of other services, including business services and export of Intellectual Property Products services.

Preliminary estimate of annual national accounts, based on the estimation process of quarterly national accounts, indicate a 1.9% increase in GDP in real terms in 2019. For the year as a whole, the GDP growth in 2019 is largely due to a positive effect of foreign trade. Despite a 5% decrease in exports, decrease in imports proved to be considerably higher, or 9.9% in real terms. 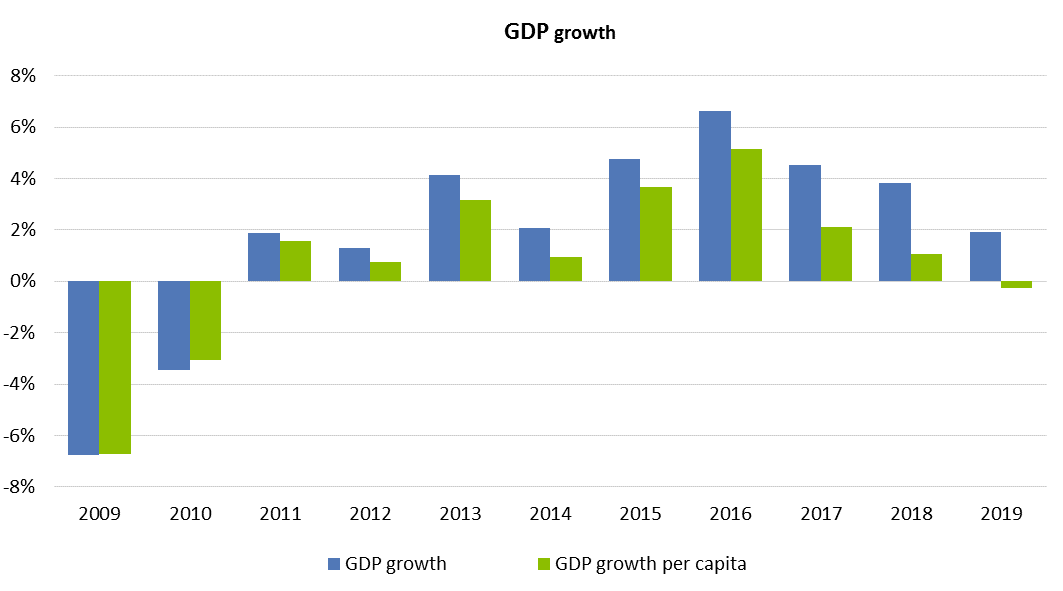 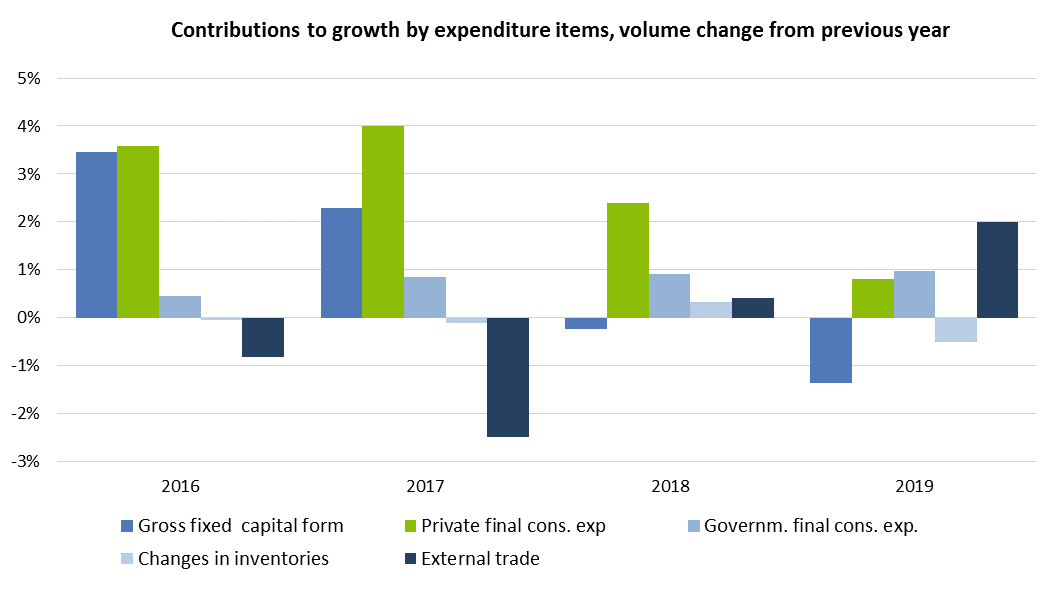 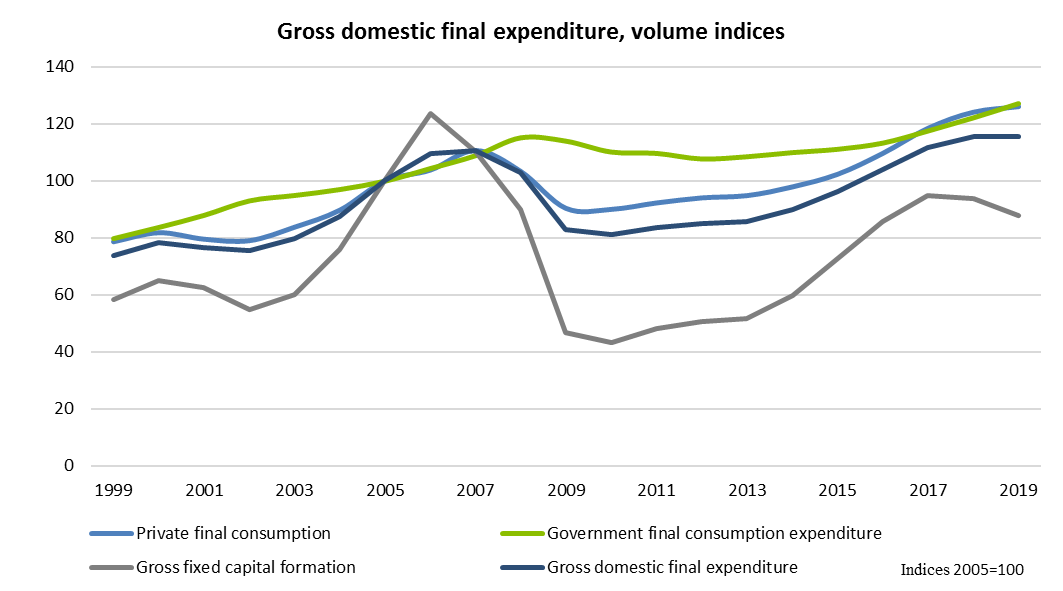 Gross fixed capital formation decreased in 2019
In the 4th quarter of 2019, business sector investment grew by 1.7% in real terms from the same period last year, while government investment decreased by 26.5%. The figures still show a considerable base effect of the transfer of ownership of the Hvalfjörður road tunnel in Q4 2018, as the state gained ownership of the tunnel with the associated positive impact on government investment. However, there is no impact on total GFCF as the increase in public investment is matched with a corresponding decrease in business sector investment. 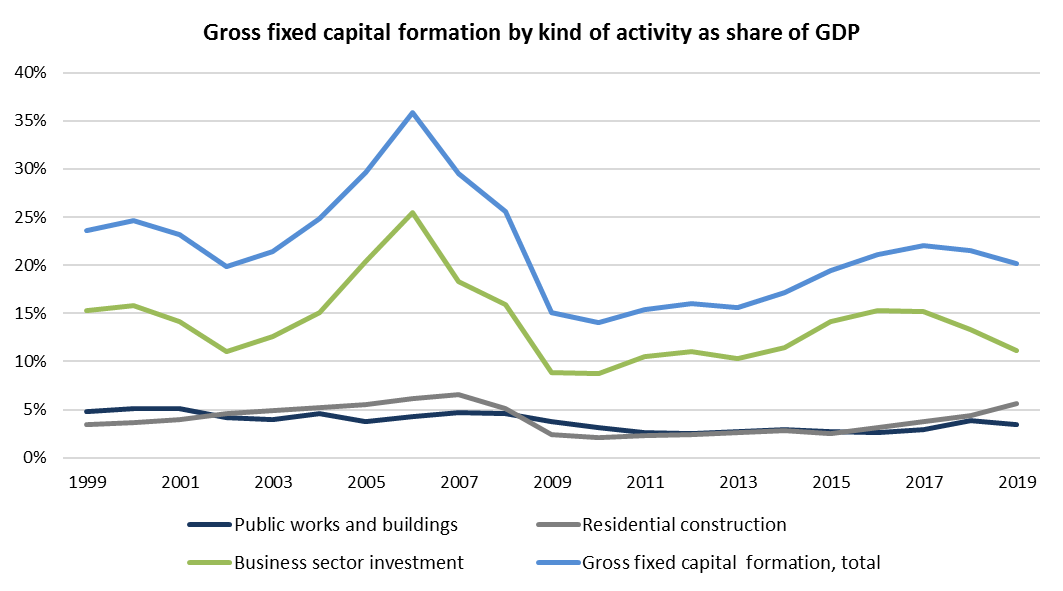 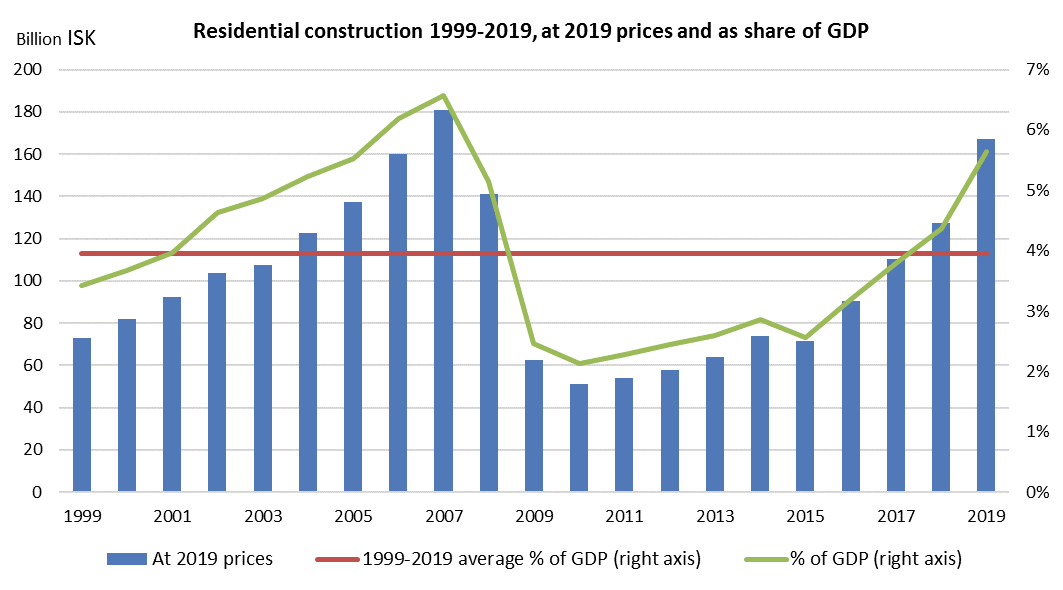 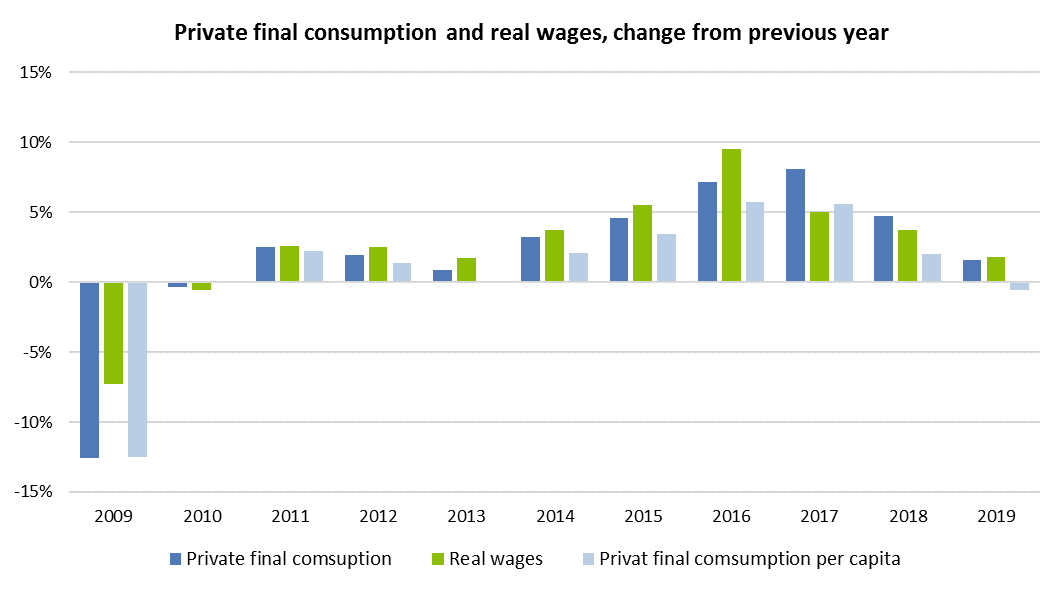 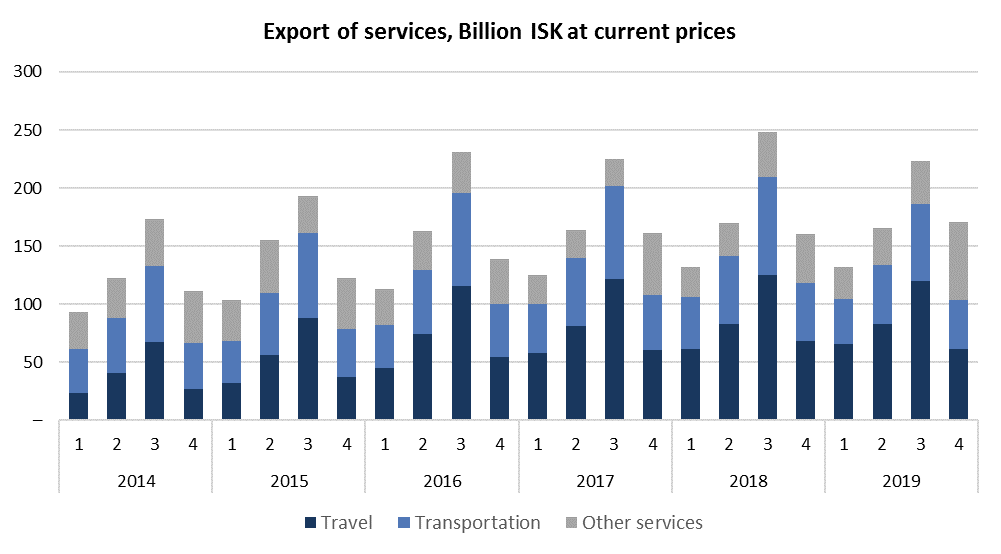 The balance of goods and services was positive by 43.9 billion ISK in the 4th quarter of 2019 and by 140 billion ISK for the year as a whole compared with 84 billion ISK in 2018 at current prices. 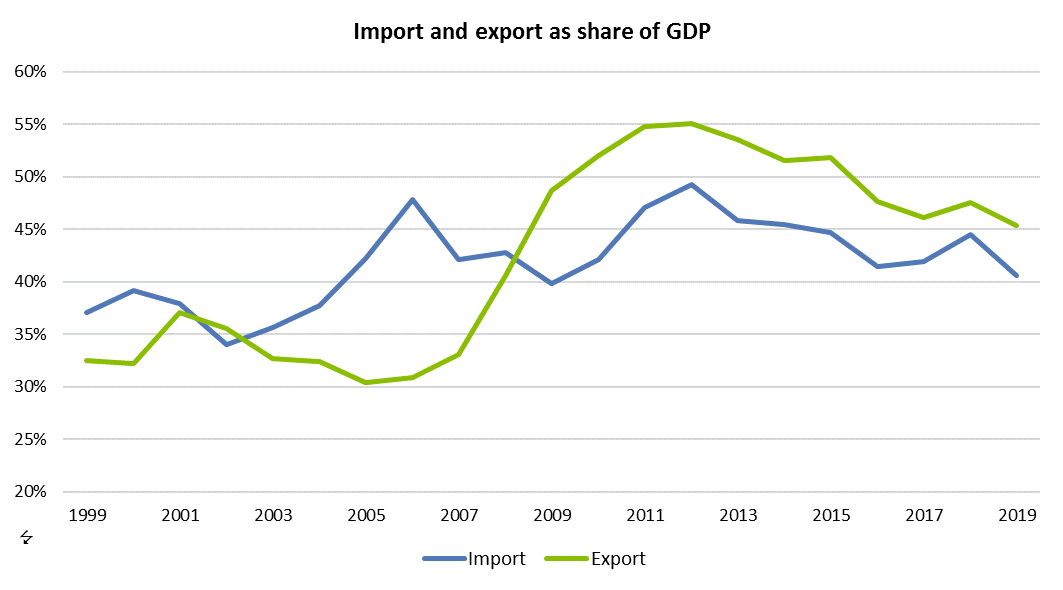 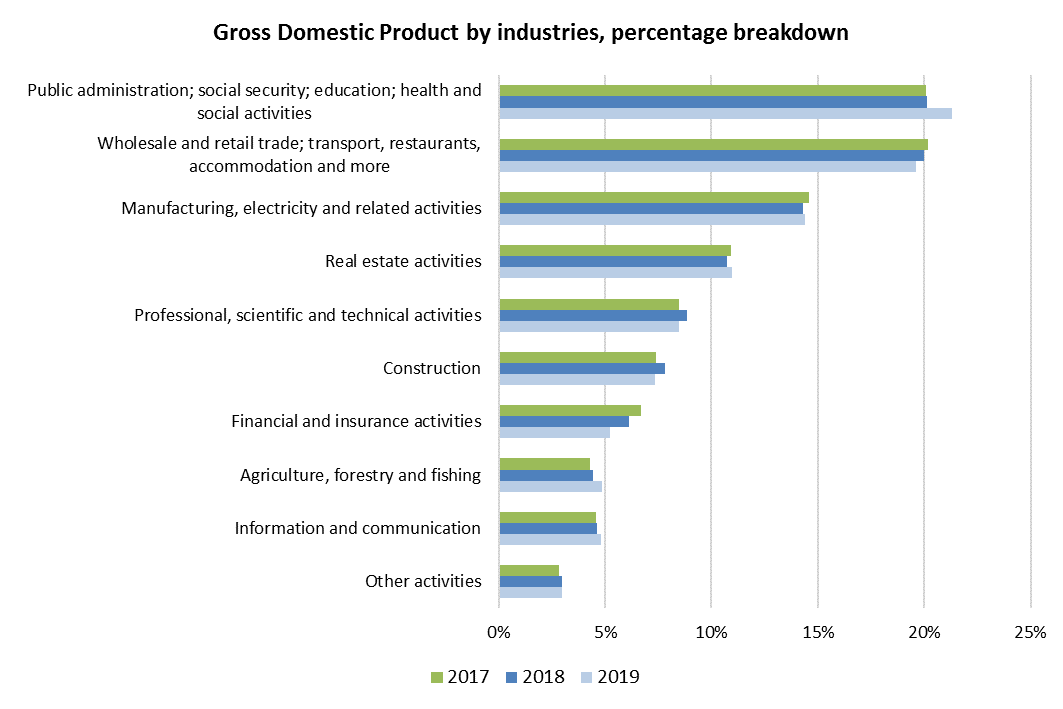 Revised figures
The general rule for revision of Icelandic national accounts is that when the annual figures are published, in February and August, the results of the previous three-year period are open for revision. Other published figures are considered final but time series can be revised if necessary. In accordance with this revision policy, we now publish revised results for the years 2016-2018 parallel to the first estimates for 2019.

Revised results of business sector investment provide a somewhat different picture of developments in 2018 than preliminary figures indicated. According to previously published figures, business sector investment decreased by 4.1% in real terms in 2018, but according to revised figures based on register based data the decrease is considerably higher or 11.5% in real terms compared with the previous year.

Measurement of business sector investment is to a large extent based on changes in assets according to corporate tax returns data, but this information is only available with considerable time lag. Preliminary estimates are based on other accessible data sources, including data on VAT turnover and imports. 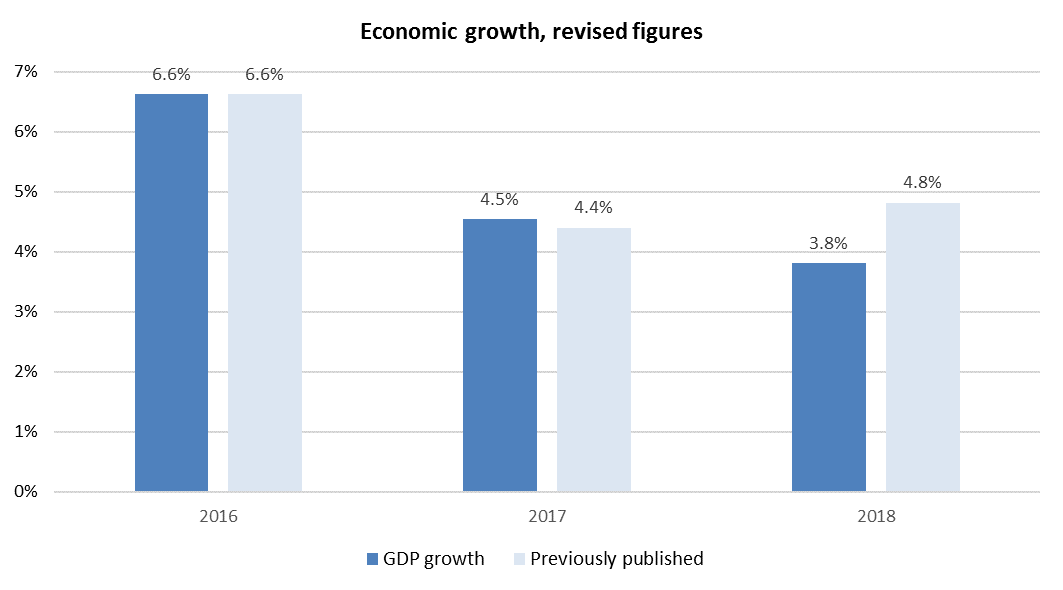 Particular emphasis is placed on the revision of the sectoral classification in accordance with the ESA 2010, especially with regard to the demarcation of the general government sector in Icelandic national accounts as well as methods used to deflate government final consumption. Concurrently with the benchmark revision, the reference year for chain-linked volumes will be 2015 instead of 2005, as has been the case since 2011. Further details of the revision will be reported in August.

Go back
Use of this press release is free. Please quote the source.
For further information please contact thjodhagsreikningar@statice.is, tel. +354 528 1136