External trade contributes positively to the economic growth in Q1 2019 due to greater growth of exports than imports. The balance of trade in goods and services in Q1 2019 was 33.2 billion ISK.

Significant increase in residential investment
GFCF decreased by 9.4% in Q1 2019 from last year’s corresponding quarter. Business sector investments decreased by 33.6%, explained in large part by the sale and exports of aircraft and ships, having a significant negative effect on GFCF for the period. Although these imports and exports are of importance in GFCF and External Trade, the resulting impact on GDP is minimal due to the effects weighing against each other.

Residential investment (GFCF in dwellings) increased significantly in Q1 2019, by 58.4% compared with last year’s corresponding quarter. In real terms, the current level of quarterly residential investment is the highest ever observed by Statistics Iceland. The estimates are derived from data sources provided by Registers Iceland, which maintains an exhaustive register of all concurrent construction works as well as the scope and progress of each construction.

Surplus in External Trade for Goods
The combined balance of trade in goods and services in Q1 2019 was 33.2 billion ISK, a significant increase from last year’s Q1 which amounted to 9.3 billion ISK in that year’s prices.

The balance of trade in goods was positive by 3.5 billion ISK in Q1 2019, but a quarterly surplus on the external trade in goods has not been recorded since the 1st quarter of 2015. The exports and imports of goods in Q1 2019 were 176.7 and 173.2 billion ISK respectively.

The balance of trade in services measured positive at 29.7 billion ISK in Q1 2019. The exports and imports of services were 131.7 and 102 billion ISK respectively for the same period. 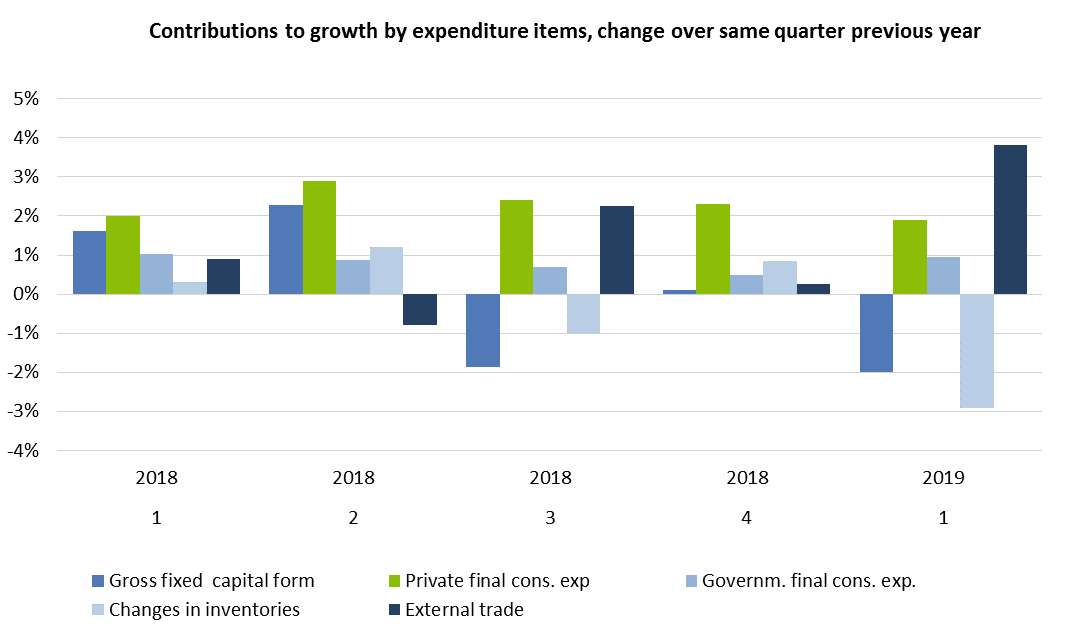 Revised Figures
A new national accounts standard (ESA2010) was implemented in September 2014, with figures being revised from 1997 and onwards. Thus, breaks in statistical time series occurred between 1996 and 1997. Coinciding with the current publication, figures have been revised from 1995 and onwards, and thus breaks in statistical time series occur between 1994 and 1995. The effects of these revisions are shown in the accompanying table.