An error was discovered in published figures on gross fixed capital formation in Q2 2019. All figures have been corrected.

The correction can be traced to mistakes that led to an underestimation of the gross fixed capital formation (GFCF) for the period underestimated by ISK 9.1 billion at current prices. The effect is expressed in two sub-items of GFCF, government services and in business sector investments, more specifically in investment in ships and aircraft. After a correction, 16.6% growth in public investment and 26.5% contraction in corporate investment is measured. The contraction in total investment is 9.2%, compared with 14.2% according to previously published results. After the adjustment, GDP growth measured 2.7% in real terms in the second quarter, compared with 1.4% according to previously published results. GDP in the first six months of 2019 increased by 0.9% compared with the first six months of 2018, but according to previously published results, the GDP growth was said to be 0.3%.

Web tables on Statistics Iceland's website have been updated accordingly.

Statistics Iceland apologises for the inconvenience this might have caused and will take appropriate measures to prevent it from recurring.

Seasonally adjusted GDP for the 2nd quarter of 2019 increased by 3.8% from the previous quarter.

Revision of 1st quarter 2019
Revised figures indicate a year over year decrease in real GDP by 0.9% for the 1st quarter of 2019, compared with 1.7% increase according to previously published results, which were based on data containing information about residential investments that extended beyond the defined reference period of quarterly national accounts. According to the revision, increase in residential investments for the 1st quarter of 2019 was 22.2% instead of 58.4% as was previously published. 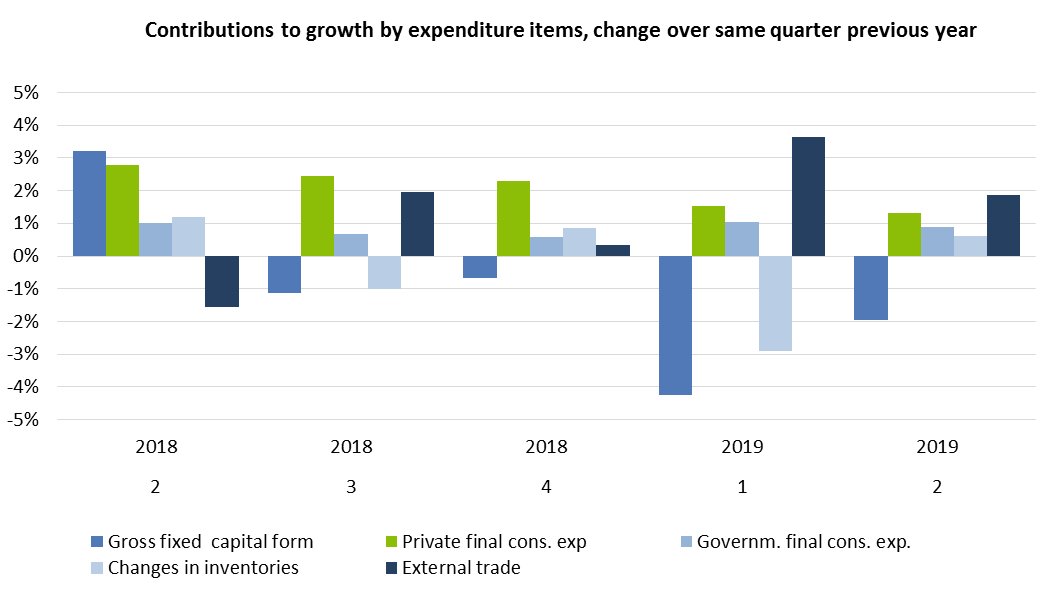 Due to changes in data with relations to the implementation of the Public Finance Act and delays in the delivery of government accounts data, published figures for national accounts are subject to changes as more information becomes available for the year 2018.

*The current revisions of annual figures are normally released twice a year. Version 1, named provisional data, is now published in end of February (t + 2 months). The 4th quarter of that year is published on the same day. The annual figures in the first publication, version 1, are partly a simple sum of the year’s four quarters based on the quarterly national accounts and only according to the expenditure approach. Version 2, named preliminary data, is released in end of August (t+8 months) and the 2nd quarter of the year on the same day. The national accounts are defined as preliminary figures until about 26 months after the end of the reference year.