In 2018, 4.5% of the population or almost 16,000 persons lived in homes in arrears of mortgage or rent in the past 12 months. This percentage has declined year by year since 2013, although the decline between 2017 and 2018 is within the margin of error. The percentage of households on the rental market that are in arrears has never been lower. At the beginning of the time series, in 2004, 12.2% of tenants were in arrears, but in 2018 they were 5.3%. As a rule, the percentage is lower among households in their own housing or 3.1% in 2018. This is among newly published results from the survey on income and living conditions (EU_SILC) for Iceland. 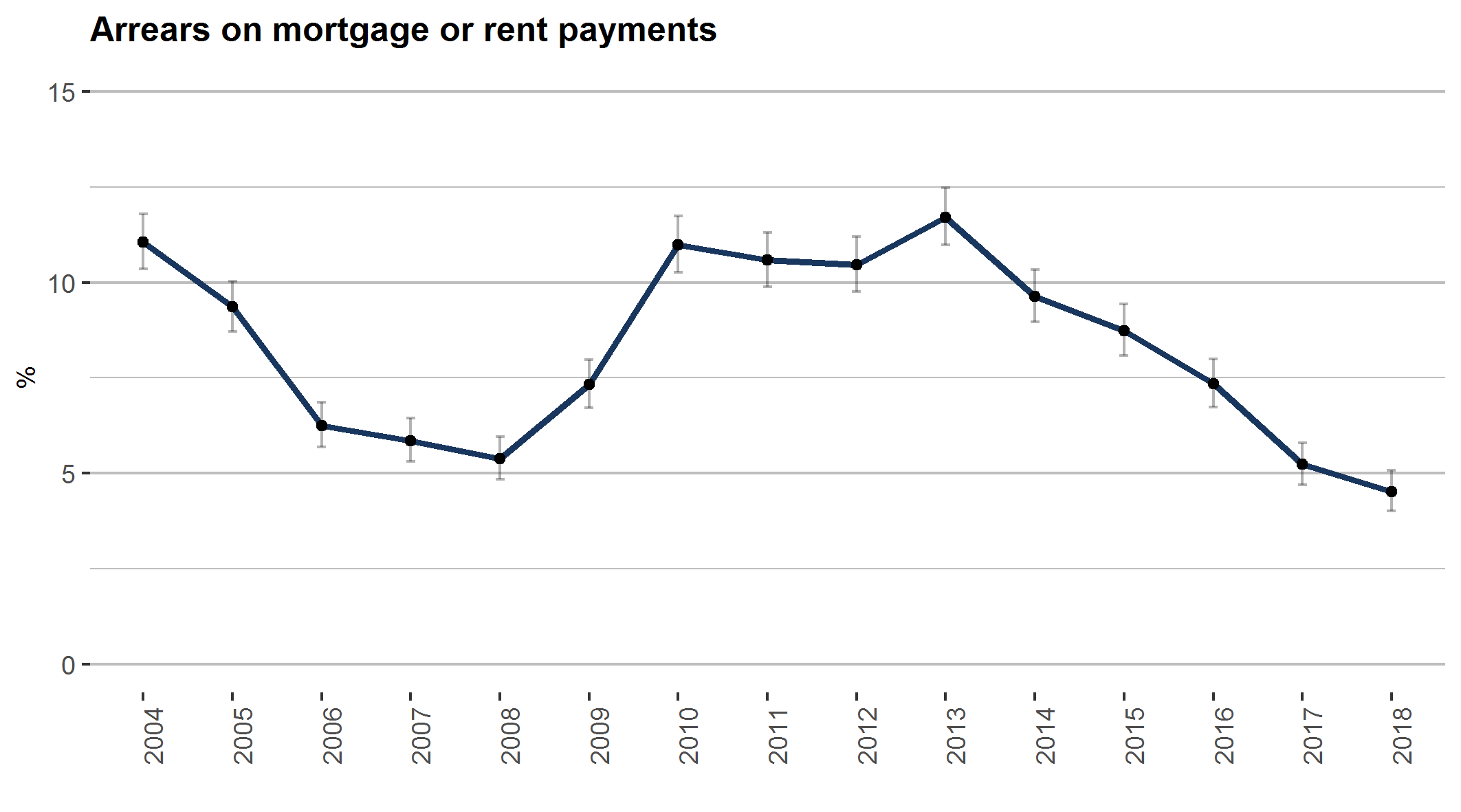 Note. Percentage of individuals living in homes in arrears on mortgage or rent payments and 95% confidence interval.

There is a link between education levels and arrears. Arrears are less common among college educated and have been declining. In 2017, the ratio was 4.4% but 2.6% in 2018. In comparison, 5.9% of individuals with basic education lived in households in arrears in 2018 or 3.3 percentage points higher. On average, there is a bigger difference between males than females as regards the ratio of arrears by education. The highest rate of arrears is among men with basic education, 8.4% in 2018.

Housing cost burden heaviest among people with low income and tenants
Half of the Icelandic population spent up to 17.7% of their household’s disposable income on housing in 2018. The proportion of of people living in households with a housing cost overburden was 8.9%, or about 31,000 individuals in about 17,000 homes. Housing costs are considered to be overburdening when the total cost of housing is more than 40% of the household’s disposable income. This burden is not evenly distributed, as one in four in the lowest income quintile experienced overburdening housing cost, while the proportion was much lower in the other income quintiles. 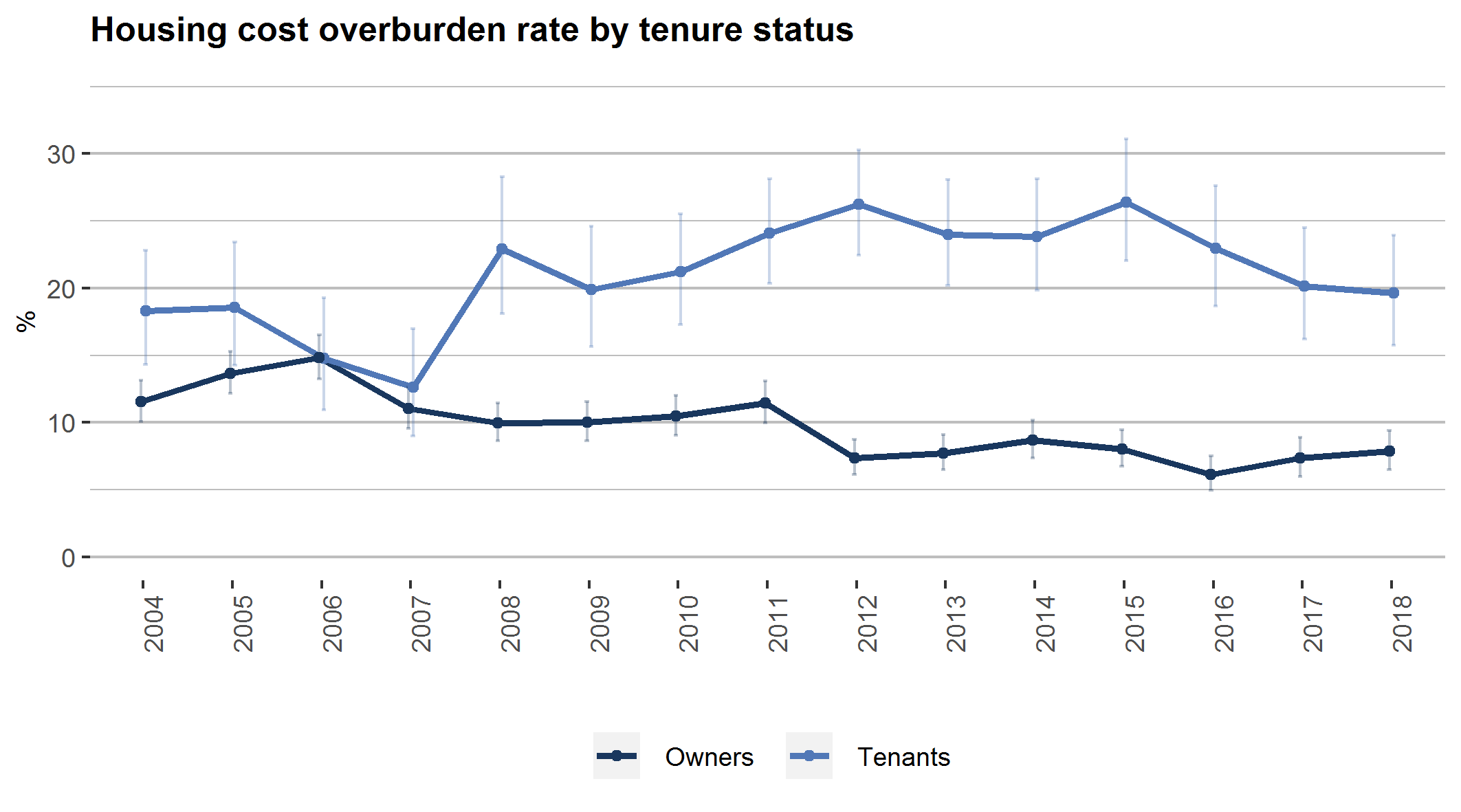 Note. Percentage of housing where the total housing cost was more than 40% of the total disposable household income and 95% confidence interval. 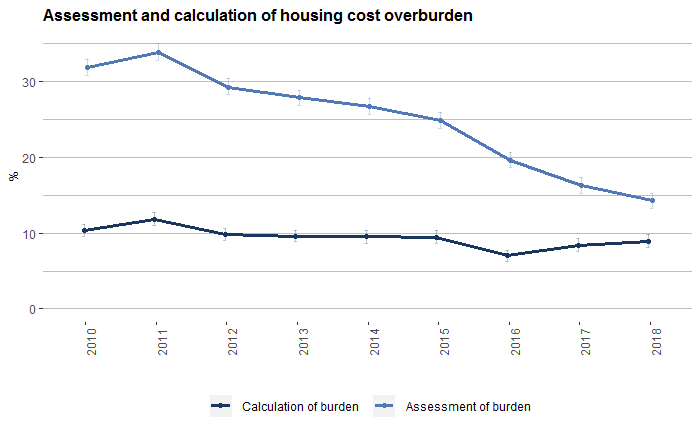 About the data
The data comes from EU-SILC for Iceland. Concurrently with the publication of results for 2017 and 2018, previous results have been revised and corrected. The correction meant that electricity and heating costs were taken into account in earlier calculations of the housing cost burden. The impact of the correction is primarily felt by tenants. Figures from 2018 are preliminary figures.

In 2010 a new question that measures assessment of housing cost burden was added to the survey in accordance with Eurostat regulations. In the new question all factors of the housing cost were read out to the respondents but the older question is more general with no reading out of the different factors. This is the reason why the time series only dates back to 2010 for this question.

The EU-SILC is a longitudinal study involving contact with more than 5,000 households yearly.

Go back
Use of this press release is free. Please quote the source.
For further information please contact gro.einarsdottir@statice.is, tel. 5281000