The Icelandic vehicle fleet has grown by an average of 4 percentage points since 1995. The number of vehicles classified as cars and motorcycles registered for road transportation has grown from 132 thousand to 309 thousand. A minor reduction occurred in the first two years following the economic crash in 2008. From 2015 car registrations have begun to increase again. . Households operate the largest proportion of these vehicles. The proportion shrunk, however, from 89.6% in 1995 to 74.3% in 2016. The proportion of car rental companies (NACE Rev.2 segment N) peaked in 2017 when they operated 9.8% of all vehicles. 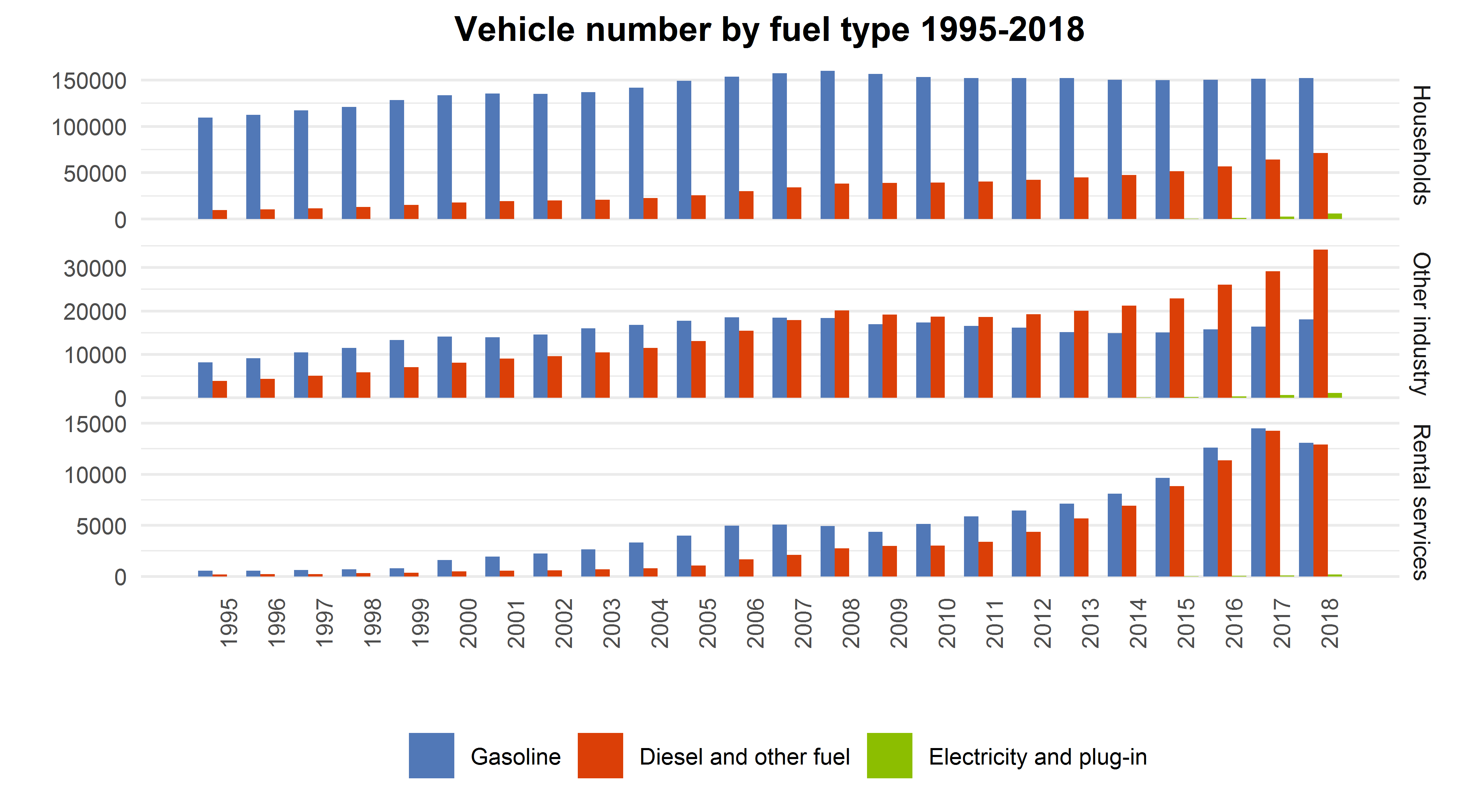 Households vehicles consume the majority of fuel distributed from gas stations
The median August-to-August driving distance of vehicles operated by households is similar to the median distance in most economic segments. The average vehicle weight is, however, significantly greater in some economic segments, requiring more fuel per driven kilometer. Even though households operated 74.3% of vehicles in 2018, their fuel consumption was only 58% of the total fuel consumed throughout the fleet, or 84% of gasoline and 41% of other fuel. Companies in the transportation and storage segment (NACE rev.2 H) operated 1.5% of the fleet in 2018 but consumed 9% of the total fuel. Rental companies (N) and construction and mining (B and F) each consumed 9% of the total fuel in 2018. 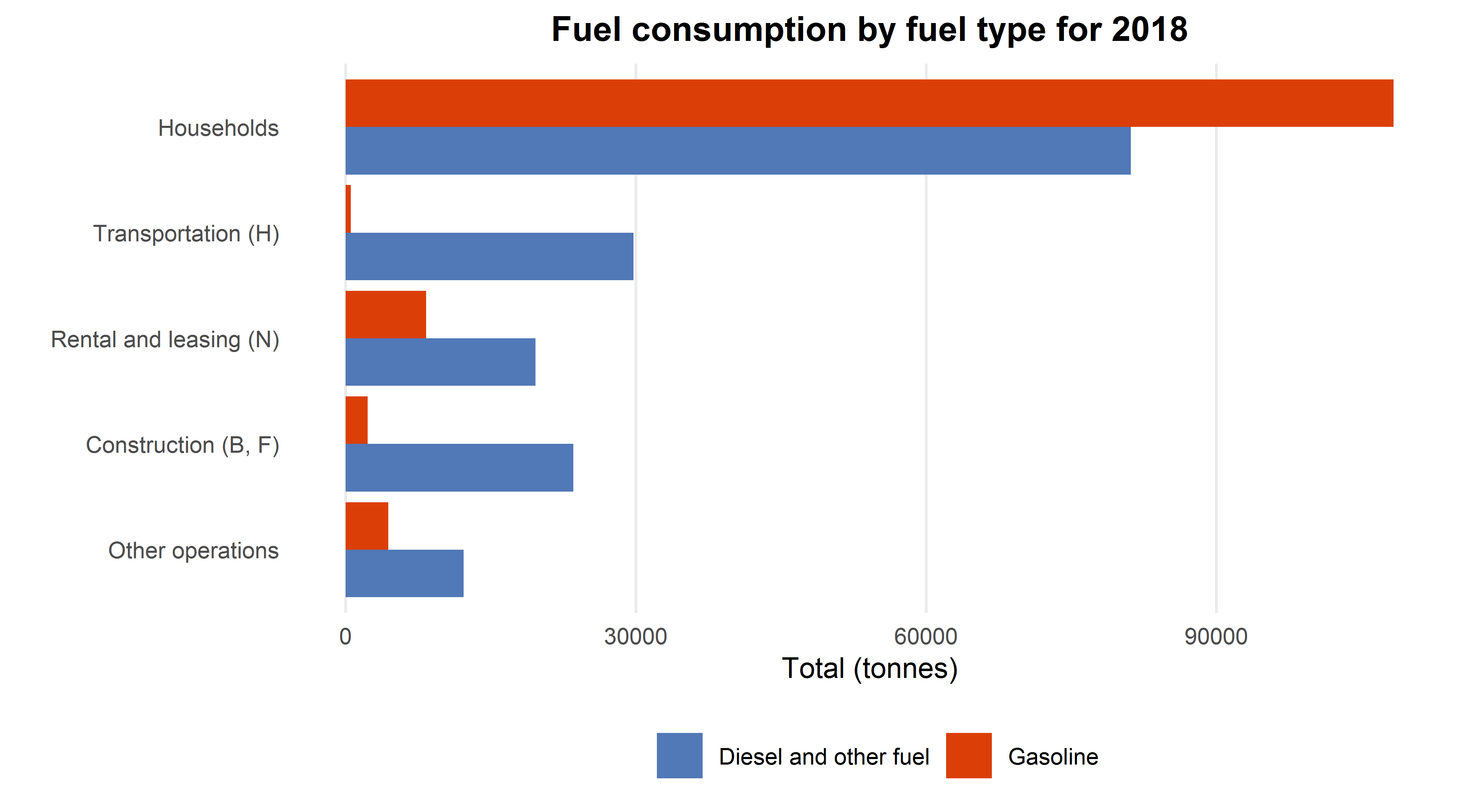 There has been some discussion on road driving by tourists and and how it may affects the strain on the environment and road infrastructure. The data published here shows that the median year driving distance by gasoline operated vehicles in the rental segment (rental cars) was 8,000 km greater than the median for household vehicles. The difference in vehicles powered by diesel or other fuel was greater, or 9,000 km, although the relative difference is less.

Median driving distances for electric and plug-in vehicles could be influenced by the fact that very few vehicles of this type have been inspected in 2018. There will most likely be a change in these numbers when more vehicles will be inspected.

About the data
These statistics are based on data collected from the Transport Authority (Samgöngustofa) and the Icelandic Energy Authority (Orkustofnun). The processed data is available via the online repository at Statistics Iceland. The dataset is classified by:

1) Year, referring to the period from August of the previous year to August of the reported year. This choice was made in order to have a more relevant overview of the market before the majority of ownership transfers occur.
2) ÍSAT2008 (NACE rev.2) class of the registered operator OR the registered owner of the vehicle. The NACE class is determined by the national registry of companies and reflects the primary operation of the company.
3) Fuel category. Gasoline refers to vehicles powered by gasoline consuming engines or hybrid engines that do not have factory- installed capacity for external charging of batteries. Vehicles solely powered by electricity, or those that are hybrid vehicles with a factory-installed capacity for external charging are classified as electric vehicles. All other vehicles are classified as diesel or other fuel.

Published measurements
1) Number of vehicles. No distinction is made on the EC vehicle size category. Vehicles that are registered for road-use (not off-road, tractors, or snow vehicles) are considered. Statistics Iceland also publishes the number of rental vehicles every month as a measurement of the tourism segment. These numbers are based on data from the Transportation Authority’s classification of vehicle usage and do not consider the NACE segments.
2) Median driving distance. Information from annual inspections was collected from the Transportation Authority. Missing values were imputed by a statistical model that considered the make of the vehicle, usage class, energy class, size of engine, vehicle weight, manufacturing year, and first year of registration. In cases where company operations are directly linked to vehicle operations, the company turnover was considered as well.
3) Average weight of vehicles (in kg). This information was collected from the Transportation Authority as well as from information gathered from vehicle manufacturers. Missing information was imputed using a statistical model based on other known vehicle properties.
4) Fuel consumption of vehicles (in thousand kg). The fuel consumption of each vehicle was calculated based on its known or imputed driving distance and fuel consumption from the manufacturer or a physical model based on vehicle weight, engine size (power), and fuel consumed. For freight carriers and tractor trailers, an additional freight weight of 10% of maximum haul and a trailer were added. The model was iterated until the calculated fuel consumption for the entire fleet was within 5% of the fuel distributed from gas stations over a two-year window.