The unadjusted gender pay gap around 16%

The unadjusted gender pay gap (GPG), according to Eurostat methodology, was 16.1% in the year 2016 and 17% in the previous year. The GPG was approximately 16% in the private sector and the central government but 8% in the local government where earnings are generally less distributed. The GPG is based on the difference of hourly earnings of men and women as a proportion of men’s hourly earnings. The hourly earnings include basic wages, regular bonuses and overtime payments.

About twice as common for men than women to have over million ISK in monthly earnings
Looking at total monthly earnings, every fifth woman had total monthly income below 400 thousand ISK for full-time work in 2016. The same was true for every fourteenth man. Approximately 15% of men and 6% of women had monthly total earnings above one million ISK. Half of women had total income below 525 thousand ISK but the median earnings for men were 643 thousand ISK. 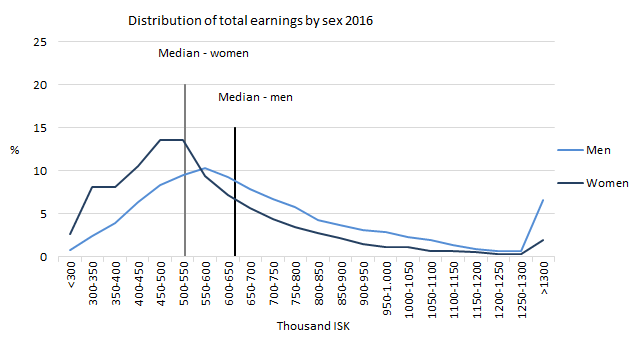 Working hours partly explain why men‘s mean total earnings were higher than women’s for full-time employees. According to the Icelandic Survey on Wages, Earnings and Labour Costs, the average number of paid monthly hours for men was 189.1 in 2016 and 179.7 for women. The gender pay gap was thus less when comparing basic earnings, where overtime pay is excluded, for full-time employees or 12% but 15% when comparing regular earnings without overtime pay but with regular bonuses.

Gender segregated labour market is reflected in the gender pay gap
The mean and median of women’s earnings was lower than men’s in all occupational groups and the difference between the 1st and 10th deciles was wider for men than for women. 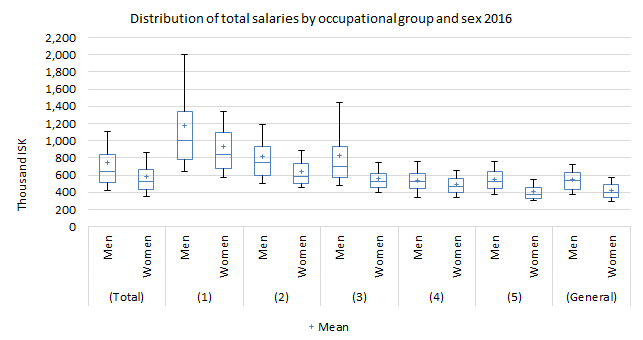 Notes: The rectangle is defined by the lower and upper quartile and divided by the median. The bars are defined by the 1st and 9th decile. Managers (1), specialists (2), technicians (3), clerks (4), service workers (5), general workers (General).

The mean and median of women’s earnings for full-time work was lower than men’s in all economic activities. The difference between the 1st and 10th deciles was wider for men in all instances except in the economic activity of Electricity and steam supply (D) and Public administration (O). 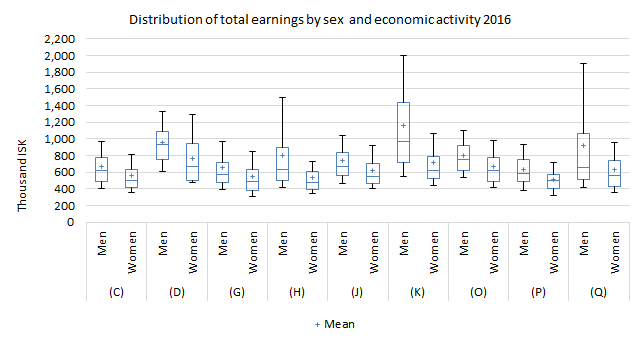 About the gender pay gap
Earnings are based on the Icelandic Survey on Wages, Earnings and Labour Costs and cover about 70 thousand employees. The survey is a stratified sample survey of legal units with 10 or more employees and data are weighted according to the survey design. The survey covers about 80% of the Icelandic labour market even though certain economic activities are missing. Basic earnings are monthly remuneration for regular daytime working hours without any supplements. Regular earnings are monthly remuneration for regular working hours that is ordinary working hours according to collective agreements, both daytime and shift-work hours, including regular bonuses. Total earnings are the total remuneration per month, excluding payments in kind. The earnings’ gender pay gap is interpreted as the difference of mean men’s and women’s earnings as a proportion of men´s earnings.