The total amount of imported raw material for fish processing in the year 2009 was 43,866 tonnes, a decrease of 87 thousand tonnes or 66% from the year 2008. The value of this import was ISK 6.2 billion which is ISK 1.9 billion lower than the previous year at current prices. Import of cod, saith, redfish, Norwegian spring-spawning herring, blue whiting and shrimp decreased but import of catfish, spotted catfish and herring increased between 2008 and 2009. 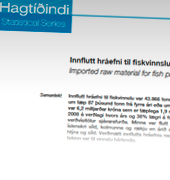