The revised annual national accounts for 2009 show a 6.8% decrease in Gross Domestic Product (GDP) in real terms. In the provisional data from March 2010 GDP was estimated to have decreased by 6.5%. The downward revision is mainly explained by less household final consumption and gross fixed capital formation than was estimated in March. On the other hand the decrease in government final consumption is lower and the balance on goods and services more favourable than was estimated in March. 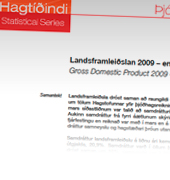