Results from the household expenditure survey 2007-2009 (at 2009 prices) are broken down by type of household, residence and interquartile ranges of disposable income and expenditure. A special study of changes in consumption following the economic downturn in the autumn 2008 has been conducted. The results are broken down by years, main expenditure groups and social variables. The real expenditures declined by 8% between 2007 and 2008 and by 20% in the two years period from 2007 until 2009. 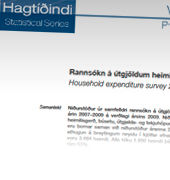